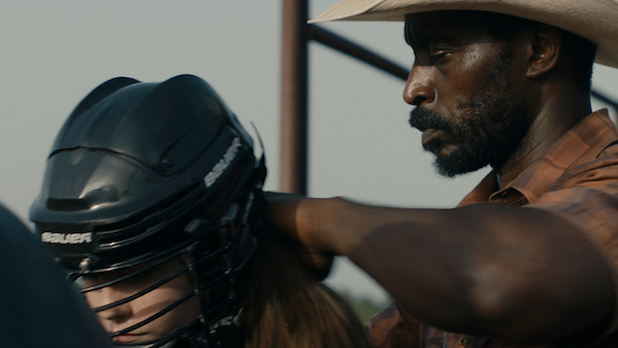 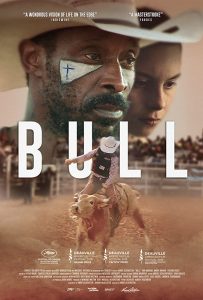 Surrounded by bad influences and iffy people, it seems likely that Kris will follow in the footsteps of her mother, who’s in jail and can’t quite seem to make it to any of her parole-hearing dates without messing up and extending her sentence. Every time Kris dares to get her hopes up, they’re dashed anew — which is part of the reason she acts out and trashes the home of her neighbor, Abe (Rob Morgan), an aging bull rider who isn’t inclined to let her off easy.

But rather than send Kris into the same system that’s taken her mother out of her life, Abe offers her a deal: She’ll fix the mess she made, and then she’ll do whatever else he needs done, too. As she discovers Abe’s world of bull riding and rodeo, Kris is fascinated — could this be her way out? She’ll have to resist the pressure to slip into dangerous habits and learn to speak up for herself to make it work.

Bull benefits enormously from its talented cast; Havard turns in a nuanced, naturalistic performance, and Morgan makes you feel every bump that Abe has hit in the saddle. The film’s frank immediacy is reminiscent of The Florida Project — it has the same kind of near-documentary feel as it brings viewers right into the heart of Kris’ hard-knock life. With Bull, Silverstein (who also co-wrote the script) has created a film that sticks with you after the credits roll. — Betsy Bozdech

Marina Antunes Annie Silverstein’s feature film debut Bull is a beautifully realized story of Kris (new-comer Amber Havard is brilliant), a teenager with a hard life, looking for her place in the world. She finds it and support in the most unlikely of places: with her neighbour Abe (Rob Morgan in a quietly powerful performance), a bullrider whose career is all but over. Silvertein delivers a beautiful story of friendship between two unlikely individuals and how said frienship helps them both through a dark period in their lives. When it ended, I found myself wanting more.

Loren King Bull, the powerful, poetic debut feature from writer-director Annie Silverstein, is rooted in neorealist tradition. The film’s use of nonprofessionals adds authenticity and atmospheric detail to this fascinating look at the subculture of bull riding among black cowboys in rural Texas. As she proved with her superb 2014 short film Skunk, Silverstein portrays marginal lives with unflinching honesty and heart-wrenching humanity. Read full review.

Pam Grady: Documentary filmmaker Annie Silverstein makes an arresting narrative debut with this evocative, character-driven drama set in a hardscrabble Houston neighborhood. Fourteen-year-old Kris (Amber Havard) is a wild child, seemingly rocketing away to an eventual spot in the women’s prison that houses her mother, while her neighbor Abe (Rob Morgan) is a rodeo clown struggling with the dawning realization that the career that his left his body bruised and broken is rapidly reaching its end. A rocky relationship forms, a bond that deepens as Kris takes to Abe’s rodeo world. The bulls and horses might offer her a way out of her dead-end existence – but only if she can get out of her own way. Silverstein’s documentary experience is evident in the way she captures the rhythms of everyday life and the quiet desperation of people existing on the margins of society. Kris and Abe are sharply written characters, fully embodied by the actors who play them. Havard, in her very first role, is astonishing as a teen who has experienced so much misery for one so young. For his part, veteran actor Morgan (Mudbound, Stranger Things) advances the film’s verisimilitude with a deeply felt performance that makes real Abe’s physical pain and the empathy that leads him to let Kris into his life.

Leslie Combemale There is always a simmering rage and despair below the surface for the characters that inhabit the world of Bull. We come to discover it’s better than the hopelessness that, for them, has a constant risk of taking permanent hold. Silverstein’s film is a meditation on the truth the forgiveness, of yourself and of those who profess to love you, is a daily practice, and one at which we fail as often as we succeed. It is sad, sweet, and beautiful. Read full review.

Nell Minow: The intimate atmosphere of this film invites us into the lives of the characters, with beautifully expressive performances by Rob Morgan and Amber Havard. The movie illuminates the fragility of these lives and the transformative impact it can make to have — or not have — someone to care for and care about.

MaryAnn Johanson We often say that movies are “beautifully observed,” and that’s true of Bull, but this one is also gently observed, in how it builds the relationship between Amber Havard’s 14-year-old Kris and her much-older neighbor Abe (the beautiful and amazing Rob Morgan). So many clichés that I feared would rear their ugly heads here did not do so, and so Bull ends up — deeply satisfyingly — a simple, profound tale of intergenerational friendship and of the community we owe one another.

Jennifer Merin Documentary filmmaker Annie Silverstein’s first narrative feature is a coming of age story set in a run down working class neighborhood in Houston and centered on the unlikely friendship between a troubled white teenage girl and her neighbor, an aging black rodeo clown whose injuries are about to end his career. The two meet after Kristal (newcomer Amber Havard) has broken into and trashed Abe’s (Rob Morgan) house. Rather than press charges and have Kris jailed, Abe gives her the opportunity to redeem herself by working for him to repair the damages and help with daily chores, an arrangement that gives Kris much needed discipline and provides Abe with new purpose as her mentor. When he introduces her to the male-dominated realm of rodeo, she decides she wants to learn to ride bulls so she can earn enough money to escape her hard knock circumstances. Brilliant performances by Havard and Morgan and the gritty authenticity of the film’s shooting style make this stunning indie feature an utterly compelling and moving must see.

Sandie Angulo Chen: Director Annie Silverstein’s Bull is a character study about two working-class Houston neighbors who couldn’t be more different but end up befriending each other: a 14-year-old white girl whose mother is in jail, a black rodeo cowboy who’s both injured and past his prime. The always brilliant Rob Morgan is Abe, whose status on the rodeo circuit has been reduced to wrangler and, even worse, clown. Newcomer Amber Havard is Kristal, who makes several terrible decisions that are upsetting but realistic for a down-and-out teen. Race is acknowledged (black rodeo aficionados wonder why Abe has a “snowbunny,” white characters casually drop the “n-word”) without being the point of the story. Abe and Kris’s dynamic feels familiar: the curmudgeonly teacher-mentor and the scrappy young student is the stuff of everything from Star Wars and Karate Kid to Million Dollar Baby. But Silverstein and co-writer Johnny McAllister aren’t interested in training montages, inspiring adages, and last-minute victories. Here there are painful truths in a world that can be unfair and unkind, but there’s also the power of hope and connection.

Cate Marquis Annie Silverstein’s debut drama Bull is set in a rundown neighborhood in East Houston, where 14-year-old Kristal (Amber Havard) is starting to rebel while struggling with the responsibility of caring for her younger sister and her diabetic grandmother while her mother is in prison. Kris is at risk of heading down the same track as her fighting-prone mother, until an incident brings her in contact with her neighbor Abe Turner (Rob Morgan), an aging African American man. Abe was once a professional bull rider but now works rodeos as a “matador,” one of the guys who distracts the bull after the rider is kicked off. The two form an unexpected bond over Kris’ growing interest in bull-riding, a bond that could be a lifeline for them both. Silverstein’s drama treats her characters with a sensitive respect but the real strength of the film is in the pair of fine performances at its center.

Release Date: March 30, 2020 (rescheduled to May 1, due to coronavirus pandemic)