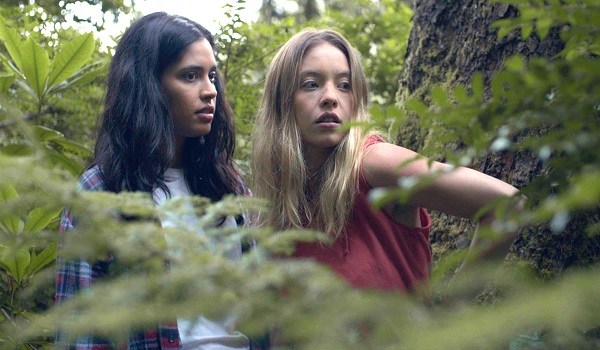 The song’s title: Is That All There Is?

More’s the pity, because Clementine — which debuted at the 2019 Tribeca Film Festival — boasts a host of attributes, from a potentially intriguing premise to a palpably unsettling mood.

Indeed, the movie’s quietly compelling opening sequence sets the stage for — well, we’re not sure what, but we’re curious to find out.

It introduces two characters who are clearly, undeniably close.

“You’re so young,” one says to the other. “You’re going to break my heart.”

“I’ve never broken one single heart,” the other replies. Not yet, anyway — because she’ll be too busy trying to deal with her own broken heart.

Karen’s so devastated that she flees to her former lover’s Oregon lake house, breaks in and tries to make herself at home even as she deepens her wounds, surrounded as she is by her ex’s inescapable presence.

The appearance of an even younger woman at the lakeside sets Clementine’s central storyline in motion. She’s Lana (Sydney Sweeney of The Handmaid’s Tale, who also played Manson Family member Snake in Once Upon a Time … in Hollywood).

Lana claims to be looking for her lost dog. But as Karen discovers, Lana has a penchant for spinning tales, precious few of which could possibly be true. (One of them inspires Clementine’s metaphorical title.)

Yet Lana’s such an ardent, appreciative audience that Karen can’t resist playing to her assumptions — and, in a sense, stepping into her ex’s role as the older, wiser woman of the world.

The filmmaker effectively builds tension in deliberate, step-by-step style — even when her narrative, and the characters carrying it, strain our collective credulity. (Which happens a bit too frequently for Clementine’s own good.)

Yet, try as they might, they can’t quite save Clementine from its inherent lethargy.

As the movie keeps going — and going — it eventually dawns on you that, despite its initial promise, Clementine’s not really going much of anywhere.