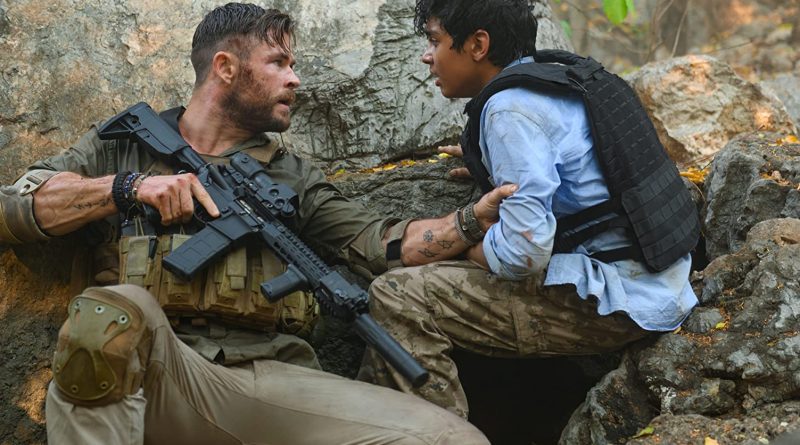 In Extraction, it’s hard to pick which is lazier: the formulaic storyline or the similarly routine dialogue. Following a troubled ex-soldier as he seeks redemption on a tricky mercenary job, this action-thriller relies heavily upon its cookie-cutter plot and hackneyed lines — so when its brooding protagonist isn’t shooting everything in sight in his quest to save the day, he’s establishing a tragic backstory and barking instructions like “move fast, stay low”. Both aspects of the film feel as if they could’ve been ripped from countless other movies. As directed by stuntman-turned-filmmaker Sam Hargrave, that’s Extraction’s approach overall. While screenwriter Joe Russo, half of the Avengers: Infinity War and Avengers: Endgame-helming Russo brothers, bases his script on a graphic novel that both siblings co-wrote with Ande Parks, this Netflix-financed feature is as by-the-numbers as action fare comes.

The setup: when Ovi (Rudhraksh Jaiswal), the teenage son of a notorious Indian drug lord (Pankaj Tripathi), is kidnapped by the latter’s Bangladeshi rival (Priyanshu Painyuli), Tyler Rake (Chris Hemsworth) is enlisted to extract the boy. That means interrupting his layabout Aussie life, where he spends his time drinking, jumping off cliffs and sitting at the bottom of lagoons in the Kimberley region. But once he’s committed to his task — and convinces his professional partner Nik Khan (Golshifteh Farahani) that, thanks to the promise of a big cash payday, he’s 100-percent up to the task — he’s determined to follow through at any cost.

Russo’s screenplay could’ve given Rake any reason to start wreaking havoc around Dhaka, and the result would’ve been the same: two hours of almost non-stop fights and chases. While Extraction’s underlying premise takes more than a few cues from Tony Scott’s 2004 film Man on Fire, which tasked Denzel Washington with rescuing a young Dakota Fanning, it eschews that movie’s depth, patience and character-building for a template-like action onslaught. And, if the near-constant gunfire and skirmishes, weaving through streets and alleys, and dispensing with disposable villains was all up to the job, it might’ve shouldered the bulk of the movie’s heavy lifting. Action choreography, when done well, is one of cinema’s great arts. Alas, although his work is slick and intricate, Hargrave crafts a cartoonish and never stylish nor involving parade of set pieces — a lengthy, chaotic single-shot sequence that’s meant to be its centrepiece included (and the prominent, winking and nudging use of a rake elsewhere as well).

Among Hargrave’s peers, Chad Stahelski and David Leitch have trodden this path before, transitioning from coordinating frenetic stunts to directing features brimming with them. They did so impressively, too, as the John Wick franchise and Atomic Blonde illustrate. But though Extraction clearly uses both as a model, it can’t make up for a lack of flair — or an absence of other points of interest. Indeed, where the two aforementioned properties also boasted stars that suited their stories, Extraction squanders Hemsworth in a standard broken man-slash-white saviour role. He’s worlds away from Thor’s goofy charm, and by design; however rather than proving compellingly haunted and resolute, he’s bland and generic. The need to have him stress his character’s Australian nationality by saying “mate” incessantly and swearing just as often doesn’t add personality, either, but just more clichés.

When he’s on-screen, the quiet and pensive Jaiswal (Noor, Indian TV’s Mahabharat) fares far better; if the movie had gone looking for another focal point, his conflicted Ovi would’ve provided a worthy alternative. While she’s barely given much attention, Farahani’s fellow mercenary is instantly more interesting than Extraction’s protagonist as well, all thanks to the Paterson and About Elly actor’s immense screen presence. What greets audiences, though, is a film that uses Jaiswal and Farahani sparingly in favour of Hemsworth’s bruised, hulking machismo, a frantic array of stunts and little in the way of substance. That, and an inescapably orange hue to Newton Thomas Sigel’s (Bohemian Rhapsody) cinematography that looks like a stock Instagram filter, plus music from Alex Belcher (Jumanji: The Next Level) and Henry Jackman (21 Bridges) that nods liberally to Hans Zimmer’s Inception score — aka, more evidence of Extraction’s bowerbird approach, pilfering what it can in a failed attempt to build something shiny.