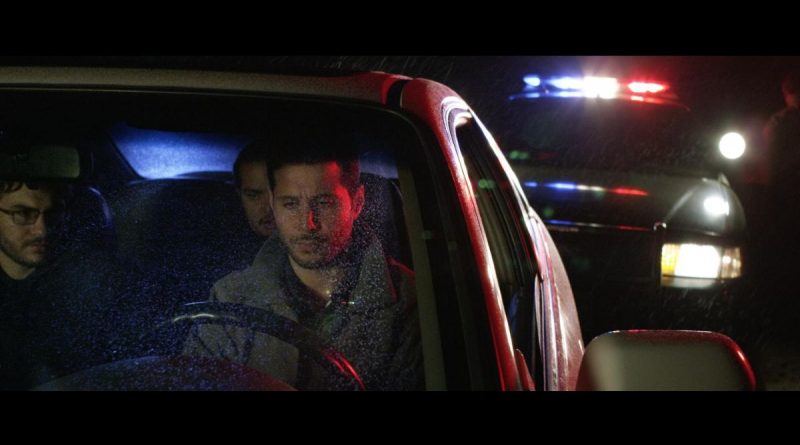 The aftermath of a crime and its darkening power over the band of criminals is one of the staples of the noir/suspense genre. Silent Panic starts off promisingly, as three friends — Eagle (Sean Nateghi), Bobby (Joseph Martinez) and Dominic (Jay Habre) — enjoying a camping trip in the mountains discover the body of a young woman in the trunk of Eagle’s car.

Of course, they should immediaTLy call the police, as Dominic and Bobby suggest, but where would crime thrillers be if this sage advice were the norm? Writer/director Kyle Schadt at least provides a plausible reason why Eagle resists calling the cops: he recently did time for a crime he didn’t commit and fears the law won’t believe that he had nothing to do with this corpse on his hands.

What ensues is a not-always-effective mix of crime thriller and dark farce as the friends start to unravel. Eagle returns home to his unsuspecting wife Robin (Constance Brenneman) who inadvertently interfers with in his slapdash plans to dispose of the car by falsely reporting it stolen. Guilt-ridden Bobby, a single dad with an adorable little boy, relapses into cocaine use after a visit to his stoned former deader, a scene that seems like padding. Dominic, a writer who is also the film’s narrator, sabotages a promising new relationship.

Despite the best efforts of the cast, the characters are a bit thin to sustain the tension. The film starts to falter midway as all three men engage in repetitive behavior. There are some Coen brothers and Tarantino aspirational glimmers but the film wavers in tone between thriller and farce particularly by the last third when the corpse ends up in a bathtub. Bobby’s initial plea that Eagle is “ruining our lives” by his refusal to report the crime and his bumbling attempts to handle it is a bit too on-the-nose. Of course we know things will spiral downward in a movie like this but Silent Panic doesn’t take us anywhere new or unexpected.