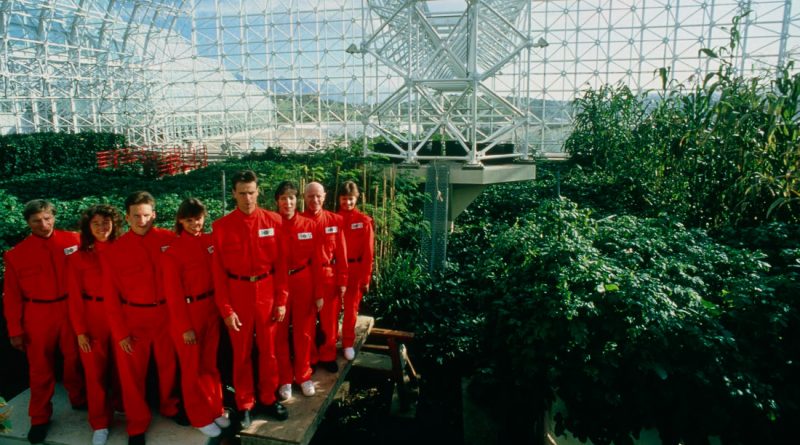 Thank collective hubris for Spaceship Earth, and for the wealth of archival footage-heavy films like it. If humanity’s need to chronicle our deeds by any means possible didn’t pulsate so strongly — and, packaged with it, the urge to show that we exist and leave definitive proof — the intimate, candid, period-specific materials that fuel many a backwards-peering documentary would be sorely lacking. That said, in the case of Matt Wolf’s fourth full-length directorial effort, viewers should thank a collective of curious, conscientious and committed scientists and free-thinkers, too. Detailing the genesis and execution of 1990s-era ecological sustainability experiment Biosphere 2, Spaceship Earth draws upon more than 600 hours of recordings; however it’s equally reliant upon the determination of the project’s participants not to chart their own actions, but to amass every piece of information they could about a pioneering and prescient endeavour.

For the uninitiated, those who missed the media hoopla three decades ago, or viewers whose experience with enclosed environments only extends to science fiction, Biosphere 2 attempted a groundbreaking feat. In a towering, gleaming, glass-walled and purpose-built facility in the Arizona desert, eight willing biospherians (as they called themselves) donned Star Trek-style uniforms and agreed to spend two years from 1991–1993 living in an elaborate vivarium. Their aim: to survive with only the materials and resources at hand, including specifically chosen plant and animal life, as well specially crafted recreations of different biomes, all to explore the viability of such a self-sustaining closed system. With gathering data for humankind’s eventual progression to the moon or Mars the big-picture goal, the project was the culmination of years of work, and of a quarter-century of dreaming by a group spawned from the 1960s countercultural movement, led by engineer and adventurer John Allen, and largely financed by Texan business heir Ed Bass.

After demonstrating dexterity and thoughtfulness with his past two documentaries — the adolescent-focused Teenage, about the emergence of the youthful demographic in the first half of the twentieth century; and Recorder: The Marion Stokes Project, which hones in on its titular figure’s TV news archive — Wolf steps through the tale of Biosphere 2 in the same fashion. It must’ve been impossible to resist starting Spaceship Earth with the sight of the bio-dome’s jumpsuit-wearing inhabitants, so the filmmaker indulges. But from there, he spends half of his feature jumping through the ‘60s, ‘70s and ‘80s to lay the story’s much-needed foundations. It may seem a risky move, making audiences wait to enter Biosphere 2. That footage, and more of those boilersuit-clad biospherians, are the film’s money shots. Wolf isn’t merely interested in revelling in the experiment’s giant spectacle, though, but in unpacking it. And as his movie explains, media at the time had all the sensationalist gawking anyone could ever want well and truly covered.

The mindset behind Spaceship Earth and its so-strange-it-must-be-true tale isn’t “wow, this happened” but “yes, this happened”, eschewing amused incredulity for an optimistic, appreciative and thorough examination. For those who can recall the events featured, as well as the controversy splashed across the press, the film fills in the gaps beyond the headlines. For newcomers, it’s methodical about detailing the who, what, when, where, how and why. In the process, the documentary excavates a chapter of history that has mostly slipped from view while never passing judgement — whether it’s touching upon the project’s absence of academic backing, the comparisons to cult-like behaviour, the accusations of staging a publicity stunt, and the many struggles that eventuated during the experiment’s two-year period.

While the aforementioned treasure trove of material from Biosphere 2 ultimately takes centre stage, alongside media coverage from the time, Spaceship Earth has another vital tool on hand. An observational, experiential Apollo 11-esque documentary might’ve worked a treat, but there are simply so many questions to unpack that first-person input is as pivotal as it is valued. Accordingly, talking-head interviews with the bio-dome’s participants and creators prove crucial. Indeed, Biosphere 2’s origins, formation and running all comprise such a wild, complex and thorny story that, without hearing it straight from the source, it just wouldn’t have the same weight.

Those twists and turns are best discovered by watching, of course. Allen and his friends’ path to the bio-dome (via their own San Francisco theatre troupe and New Mexico ranch, sailing the world in their own handmade boat, and also starting businesses around the globe) is best heard firsthand as well. So is the passion behind the vivarium experiment and every stop along the way, as well as the initial guiding principles. That enthusiasm and eagerness shines through not only from the surviving biospherians, but from Allen and company. It’s what makes Spaceship Earth so potent and engaging, too. This isn’t just a record and re-assessment of a bold, sci-fi-inspired, oft-dismissed project — with links to today’s political reality in the US, as well as to the planet’s battle against climate change, it’s both a window into the past, an interrogation of a dream and a glimpse at how we came to live in this particular future.