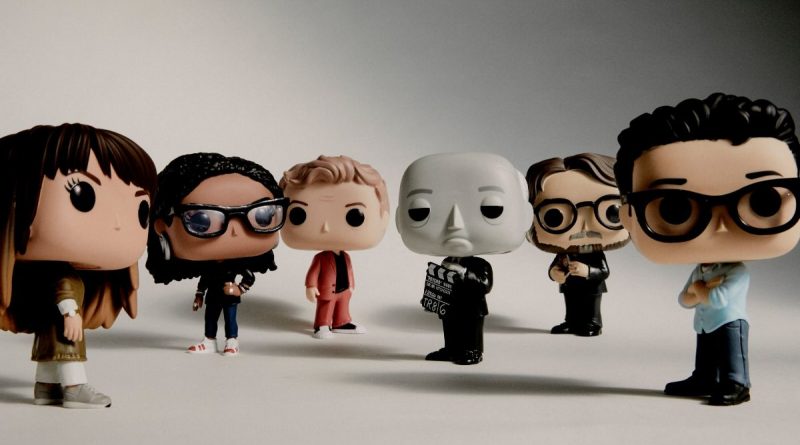 Back in 2018, inspired by the movie memorabilia displayed and sold at that year’s ComicCon, AWFJ member Leslie Combemale wrote From Comic-Con: #FemaleFilmmakerFunko for #FemaleFilmmakerFriday, an essay for AWFJ.org, suggesting (demanding, really) that movie memorabilia manufacturer Funko include female film directors in it’s popular series of collectible filmmaker Pops, which was initiated in 2016 with a Paul Feig figurine, and then expanded to include Alfred Hitchcock, Guillermo del Toro, J.J. Abrams, and four others (or five, if you count producer Jason Blum) male directors with near cult status among film fans.

“We’ve noticed that Funko is a movies merchandising company that stays way ahead of the curve, and might be just the perfectly fearless innovator to acknowledge that women — yes, women — do buy toys, and that girls — yes, girls — want to see themselves represented in collectibles such as your figures, right along side directors like Waititi and Del Toro,” wrote Combemale. “I bet if you ask Waititi and Del Toro, both of whom champion women in film and support diversity and inclusion, they’d agree that this is a perfect opportunity for Funko to include female figures in your line up.”

AWFJ tagged Funko in the article and on social media, challenging the company to meet demands for collectible female film director Pops. Two years later, Funko has met the challenge by releasing the Ava DuVernay Pop in March, followed by the Patty Jenkins Pop in April — with good lead time for the (now canceled) 2020 ComicCon.

While there’s no way to know just how much, if any, Funko’s creation and release of new female film director Pops were instigated or influenced by Combemale and/or AWFJ.org, the article was recently referenced and Combemale was quoted in Robert Ito’s New York Times piece about Funko’s release of new Female Filmmaker Pops.

To date, there’s been no indication whether Agnes Varda and Catherine Hardwicke — or any of the many accomplished female film directors worthy of a Pop — are scheduled for premieres, but thanks, Funko — it’s great to see that the powers-that-be in the pop culture collectibles community are committing to representation of female filmmakers. And please put Agnes Varda and Catherine Hardwicke on your list.