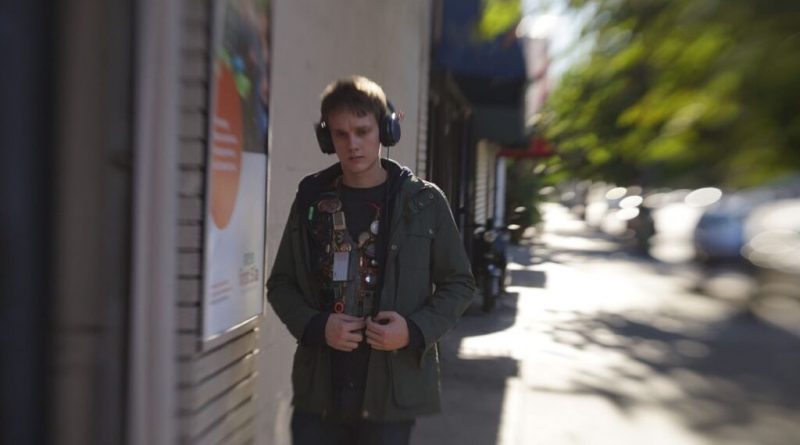 Francis Ford Coppola’s landmark The Conversation casts its giant shadow over Soundwave — there’s even has a minor character named H. Caul as a tip of the hat to Gene Hackman’s Harry Caul. The film is no The Conversation, of course — few films are or will ever be. But writer-director Dylan K. Narang has crafted a satisfying low budget thriller about a teenage sound expert Ben (Hunter Doohan) whose life is in jeopardy because of his invention of a device that locates conversations across space and time.

Ben works at a nondescript electronics shop run by the paternal Antonio (Mike Beaver) who also knew Ben’s father. Dad disappeared years ago but Antonio won’t share the details despite Ben’s eagerness to know. Ben devised the sound equipment in the hopes of hearing his father’s last conversation and solving the mystery of what happened to him. But others want the strange looking little contraption that Ben keeps strapped to his chest and which allows him, with a swipe of his fingers, to hear all sorts of random conversations, from a young woman’s suicide plans to a mother’s voice as she croons a lullaby.

A detective (Vince Nappo) pays Ben to use his machine to help solve crimes. Enter sleazy businessman Frank (Paul Tassone) who sees big money in Ben’s device, particular when he finds out it can replay conversations from the past. Soon gangs of thugs are in pursuit. Also in danger is Katie (Katie Owsley), the young suicidal woman Ben tracks down and befriends. His explanation to her about the science of his invention — soundwaves remain bouncing around in the universe and require only this clever contraption to bring them in — doesn’t really make sense but Ben’s plight is so urgent that we can suspend belief.

Narang’s device of using freeze frames when Ben listens to sounds and voices through his headphones is somewhat distracting and starts to wear thin after a while. As the action mounts, the plot strains credulity — Frank and his crew are too obvious and clumsy to elude the cops— but Soundwave does create suspense and an investment in the likable Ben’s unique predicament.