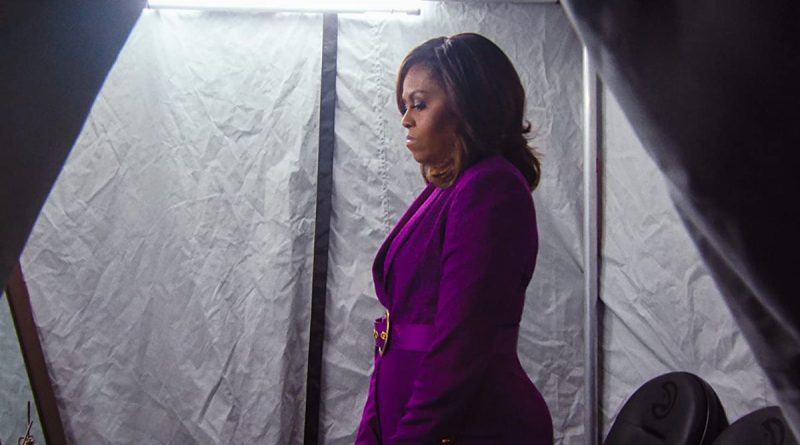 The word “becoming” has two connotations.

As a verb, it indicates the process of something (or someone) coming into existence. As an adjective, it describes something flattering.

Both definitions apply to Becoming, the new Netflix documentary that follows former First Lady Michelle Obama’s journey — not only to promote her best-selling memoir of the same name but to reach the status, as her brother marvels, of “being the most popular person in the world.”

Perhaps the latter assessment depends on who you ask. But Becoming never really asks anyone who would dare to disagree.

An authorized project — from the Obamas’ Higher Ground production company, no less — Becoming provides a behind-the-scenes glimpse of the mechanics, and meaning, of a big-time book tour.

And when we say big, we mean big, as cheering thousands assemble to hear her interviewed by such celebrity moderators as Oprah Winfrey (who kicks off Obama’s hometown Chicago tour launch) and Stephen Colbert, who hosts the grand finale.

Wherever she goes, however, it’s Michelle Obama who’s unquestionably in the spotlight. Copious close-ups of enraptured arena audiences attest to her star quality. And heaping helpings of her hard-won wisdom underline the obstacles she’s overcome before, during and after her eight years in the White House.

Fortunately, Becoming has a more intimate side — and not just involving such family members as her mother and brother. Never fear, ex-President Barack Obama appears on the scene from time to time, as do all-grown-up former First Daughters. Malia, for example, reassures her mother backstage that “those years weren’t for nothing. … People are here because they really believe in love and hope and other people.”

Speaking of other people, some of Becoming’s most compelling sequences involve Obama interacting with smaller groups, from book club members to church ladies and students from various backgrounds.

But Becoming’s director/cinematographer, Nadia Hallgren, can’t pause for such contemplation; she has too many other agenda items to include.

Video footage of the historic 2008 campaign and election that brought the Obamas to the White House? Check. Fond reminiscences from such staffers as her fashion stylist and longtime Secret Service agent? Check. A sentimental journey back to her girlhood home? Check.

It’s all informational, sometimes even inspirational. Yet, alas, Becoming never becomes anything more than that.