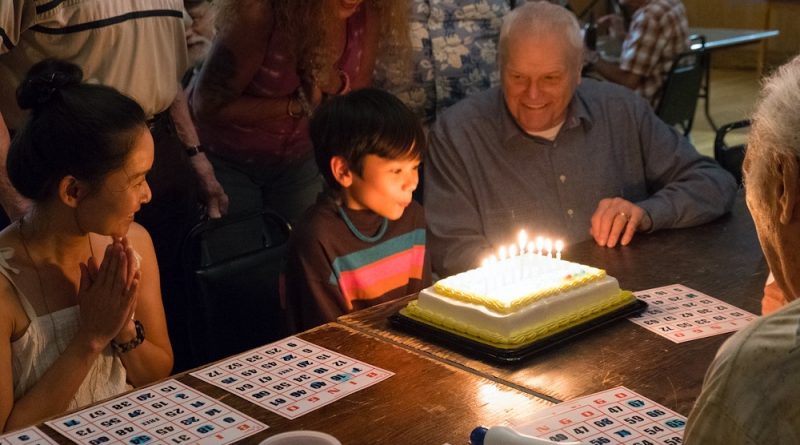 In these tumultuous, anxious times, it’s understandable that many people think that life will never get better. Now is the perfect moment to reflect on the goodness in the world, and I can’t think of a better way to do it than to watch Andrew Ahn’s humane, optimistic film Driveways.

This 2019 release that will be available for streaming on most online platforms May 7 focuses on divorced mother Kathy (Hong Chau) and her 9-year-old son Cody (Lucas Jaye) who travel across country to clean out her recently deceased sister’s home to get it ready to be sold. Her sister was a hoarder, and Kathy sees it will not take the four days she budgeted to complete the clean-up.

Money is tight, so she and Cody give up their comfortable hotel room and spend the rest of the time camping on the house’s enclosed porch in viewing distance of Del (Brian Dennehy), an elderly widower who lives next door. He takes a shine to Cody, and the pair form a sweet friendship, with Del filling a hole as a father figure for the lonely, impressionable Cody.

These three people, hardened to some degree by life’s challenges and disappointments, learn to trust in others, accept the regrets of life as it was, and find ways to move forward with faith and hope. There isn’t a hard bone in this poetic film’s body, and it is encouraging to see Asian Americans at the center of it. While not all of the characters are well sketched—for example, a gossipy grandmother played by the wonderful Christine Ebersole—they are all treated with sympathy.

Dennehy, who died this past April at the age of 81, looks very frail in this film, the second-to-last of his life. As such, he doesn’t get a great deal of screen time, but he makes the most of his interactions with Kathy, Cody, and a group of army buddies who play bingo at the local VFW. His final speech, however, shows just what a profound and affecting actor he was. Driveways is a fitting last act for this fine performer.