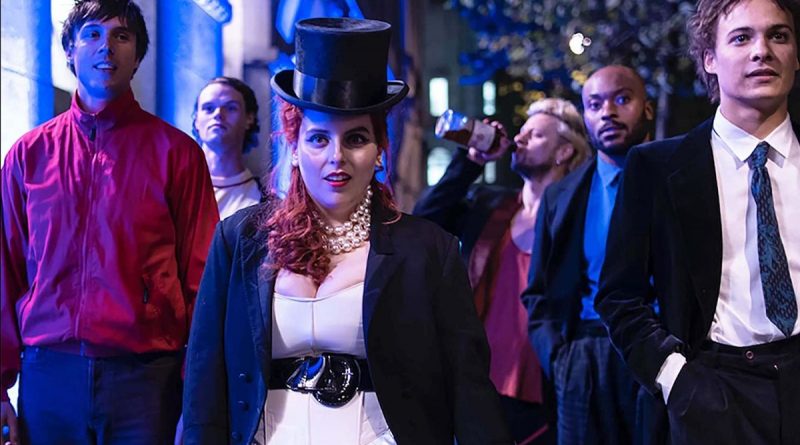 Oh, teenage girls would be so much happier and more self-confident if they just looked to Beanie Feldstein as their role model instead of one of the Kardashians.

The young star of Booksmart returns to the screen – sporting a British accent! – in How To Build a Girl, and she’s an absolute delight.

This coming of age story, written by Caitlin Moran based on her semi-autobiographical book, follows 16-year-old Johnna (Feldstein) as she uses her writing skills to break free of her likely destiny. She lives in council housing in Wolverhampton, England (“Where?” you ask. Exactly.) with her four brothers, her overly exhausted, postpartum mum (Sarah Solemani) and wanna-be rock star dad (Paddy Considine).

Johanna knows she has the potential to rise above her circumstances and doesn’t understand why no one else seems to see that. She has an active imagination, as evidenced by the posters on her bedroom wall (Sigmund Freud, Sylvia Plath, Julie Andrews) which come alive to offer her advice and encouragement – and it serves her well.

Because she needs to make some money, she answers an ad for a rock music magazine that’s looking for “hip young gunslingers.” In her mind, she definitely could fit that description although she doesn’t know anything about who’s hot or what’s topping the charts. She hilariously submits a heartfelt review of the soundtrack to Annie, which lands her an interview and – because, despite being mocked and rejected, nevertheless she persisted – a job.

Her first assignment finds her (understandably) falling in love with her singer-songwriter subject (Alfie Allen). She turns in a fluff piece that, she’s told, sounds like it was written by a teen girl. “But I am a teen girl,” she says, bewildered.

When her misogynistic young bosses explain, “Our job is to napalm the parasites,” she takes their words to heart. She dyes her hair, dons a top hat, starts writing scathing reviews under the nom de plume, Dolly Wilde, and becomes a legend. When she ultimately is named Asshole of the Year, she realizes it may be time for another transformation.

Feldstein is riveting as she internalizes both Johanna and Dolly, and it’s all we can do to keep up with the breakneck pace of her emotions. This is a girl who gives her all to everything she does.

Director Coky Giedroyc has created a movie that’s funny and shocking and heartbreaking and frustrating. It’s exhausting – just like the process of building a girl.