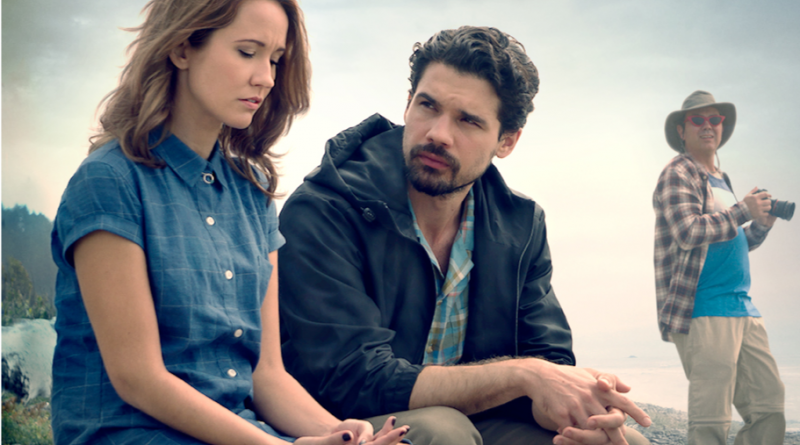 The film Here Awhile is an adept look at the shock of death, not just from the finality of it, but the preparation for it which most younger people give little to no thought about in their day-to-day lives.

Despite the ubiquitous nature of all life dying at some point, the subject of death is hard enough to face, let alone to make into a compelling watch where it does not devolve into a breakdown level of emotions for the viewer (Terms of Endearment, Million Dollar Baby).

But novice filmmaker and actor Tim True does an exceptional job with his producing partner, Csaba Mera, in a first-time directorial effort presenting not just a swan song for a young woman struck down in her prime by inoperable and untreatable cancer, but also educating the viewer to the Oregon law that allows a terminally ill person to decide how and when to end their life.

It’s not suicide, per se, but a dignified and medically supervised alternative to allow the terminally ill to avoid the agony of breaking down in a sterile hospital room begging for morphine.

In True’s Here Awhile, we meet Anna (Anna Camp), a successful artist, who has arrived in stunningly green and alive Portland, Oregon after 15 years to reconnect with her estranged younger brother Michael (Steven Strait).

At first, we are not sure why there was ever a break, and in a series of conversations that reveal the Sturm und Drang of their childhoods, we hear about their fractured family flaws, and the pain of losing both parents, first the mother, then the father to Alzheimer’s, with Michael bearing the brunt of caretaker all alone for his failing father.

Now back in his life, Anna is finally frank with Michael. Her backstory emerges. After she was cast out of their childhood home by an unforgiving father over her homosexuality, she scraped and suffered, initially living as a homeless person in San Francisco. Her fortunes changed and finally her art became a viable source of income. Life was beautiful, romance bloomed, and finally enough success was achieved for Anna to buy a home. Yet, Anna was radio silent with her brother through all of this.

The happiest part of Here Awhile is that regeneration of the once tight as ticks relationship arc between Anna and Michael, told in a series of childhood flashbacks. Sadly, this happiness doesn’t last long, as Anna’s back is against the wall with a nasty aggressive form of colon cancer that has spread to her vital organs.

The Oregon Death with Dignity Act, woven into the plot, gives the state’s residents the step-by-step “out” needed for any no win medical situation. It lays out a carefully metered sequence of events. No last-minute miracles for Anna or magic trials of false hope. She is pragmatic, unnervingly upbeat and determined to end her life on her terms, if her brother will let her back in his world.

Here Awhile has a well-chosen supporting cast, whose affecting performances are underscored by the captivating verdant landscape, tree-filled streets and windswept rough beaches of Oregon. This stunning place is given great love by True’s eye as he captures that gracefulness, peace, and beauty of the setting as only someone who is familiar with it could do. Other elements that add deeply to the film’s overall impact are the score and music by Sean Barrett, and the beautifully rendered lensing by True’s DP, Philip A. Anderson.

The cast surrounding Michael, who is the victim of such profound loss in this sad story, include Michael’s girlfriend, Shonda, and Michael’s unusual friend and neighbor, Gary (Joe Lo Truglio), and Anna’s partner, Luisa, who is introduced towards the end of the film.

Lo Truglio perfectly delivers the nuanced behaviors and abrupt tics of a man dealing with high functioning Asperger’s and OCD, and a host of other medical and psychological issues. Despite all that he connects with Anna in a profoundly unusual way, his face app that reads faces tells him immediately she is a lesbian and she is very sick. His childlike absorption of facts, his brilliant interpretation of what it all means, and his honesty are refreshing. His performance adds unexpected comedic relief through the progression towards Anna’s last day and adds another layer of poignancy to this memorable one box of Kleenex weeper.

Hats off to True in his directorial debut and for an authentically compelling script created with collaborator Csaba Mera. Again, death and the right to end one’s own life is a controversial subject to address in an inaugural feature film. But his depth of knowledge in putting together a great ensemble of skilled actors combined with spot-on technical aspects of filmmaking to dramatize a touchy subject worked. Hopefully we will be seeing more creative output from True and Mera.