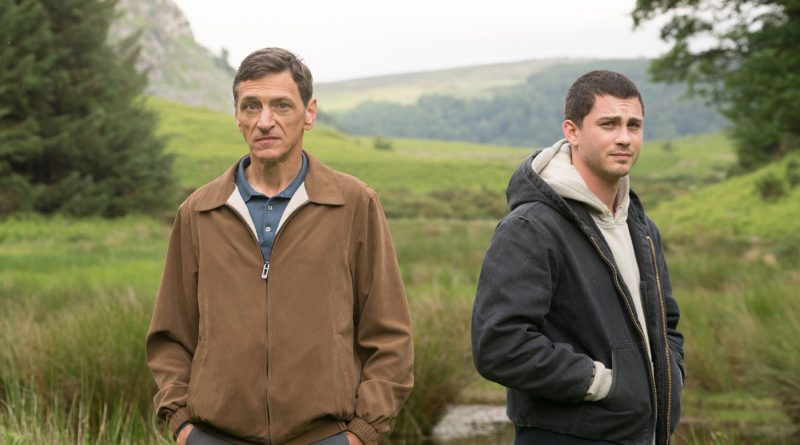 In the modest but moving End of Sentence, a reserved, polite John Hawkes clashes with a brash, angst-riddled Logan Lerman, with duo playing a father and son struggling to put aside their differences. But to get there, Elfar Adalsteins’ feature debut has to navigate past one of cinema’s most egregious clichés: the life-changing death of the former’s wife and the latter’s mother due to the go-to killer that is cancer. Consider that the movie’s biggest journey. The film charts a literal road trip, its two protagonists reluctantly pairing up on an Irish jaunt to scatter the ashes of the woman they’ve just lost; however the feature’s ability to veer past its clunky setup proves its most important venture. What starts as yet another movie about men experiencing an emotional awakening due to a woman’s passing — and initially establishes its premise in a dispiritingly by-the-numbers way — ultimately becomes genuinely insightful and touching.

The key, as existing fans of Hawkes’ work will likely instantly predict, is casting. Hawkes can ooze menace when required, as his Oscar-nominated performance in Winter’s Bone showed, but he’s especially exceptional when he’s quiet, kindly, vulnerable and understated. In other words, his Deadwood mode suits him swimmingly, as it does this film. It also provides a restrained canvas for Lerman to bounce off — with the Percy Jackson, Perks of Being a Wallflower and Hunters star turning in one of his most forceful, potent and multi-layered portrayals yet.

When Frank Fogle (Hawkes) accompanies his wife Anna (Andrea Irvine) to visit their car-thief son Sean (Lerman) at an Alabama prison, it’s so that she can say goodbye. The next time the two men cross paths, Anna is gone and Sean has earned his release, but wants nothing to do with his dad. Instead, he has a new life planned in California, complete with a job waiting in Oakland. But when roadblocks swiftly thwart his cross-country trip, Sean begrudgingly agrees to accompany Frank to Anna’s homeland to fulfill her final wish. Also helpful: the promise that his father will sign over a just-discovered Irish property neither knew Anna owned, which holds more than a little sway in convincing Sean to make the trip.

As scripted by Michael Armbruster, End of Sentence quickly exports the Fogle men to Ireland’s scenic greenery — sending the pair to unfamiliar territory, at least for them, to excavate a familiar on-screen dynamic. Their trek begins in Dublin, where they not only attend a bar wake with Anna’s Irish friends and relatives, but learn of another side to the dearly departed. Much to Frank’s initial displeasure, they also agree to give seductive hitchhiker Jewel (Sarah Bolger) a ride away from her troubled past, a decision that will eventually test both men’s boundaries. Narrative-wise, it’s a standard trajectory, even with fits of jealousy, a police chase on a ferry and violent altercations thrown in — and with Anna’s ashes, as contained in an urn, given an almost Weekend at Bernies-esque role.

In her second impressive turn in short succession after the vastly dissimilar A Good Woman Is Hard to Find (and one that includes a tender musical scene), Bolger perfects the same balance that serves her End of Sentence co-stars so well: finding raw emotion and affecting depth while traversing well-worn terrain. Frank, Logan and Jewel are all characters that audiences want to spend time with, and to learn more about — they’re wandering through a recognizable scenario but, thanks to the film’s performances and its compassionate yet perceptive touch, they’re compellingly flawed figures that viewers come to care about. Trusting his cast to have that effect, Adalsteins tasks cinematographer Karl Oskarsson with peering at their faces often, particularly Hawkes and Lerman. Scene by scene, Frank’s rigour softens, as does Sean’s bluster, and it’s poignant to watch.

Indeed, the back-and-forth between Hawkes and Lerman proves so absorbing that, once they’re on the road in Ireland with picturesque fields of green peeking through their car windows, the film shakes off the formulaic and emotionally lazy air it emits at the outset. This may be another movie about men forever changed by a woman’s death — and another feature that quickly dispatches with a female character to fuel male growth — but it’s also thoughtful, shrewd and heart-rending, earning investment in its protagonists, their experiences, and both their internal and external journeys.