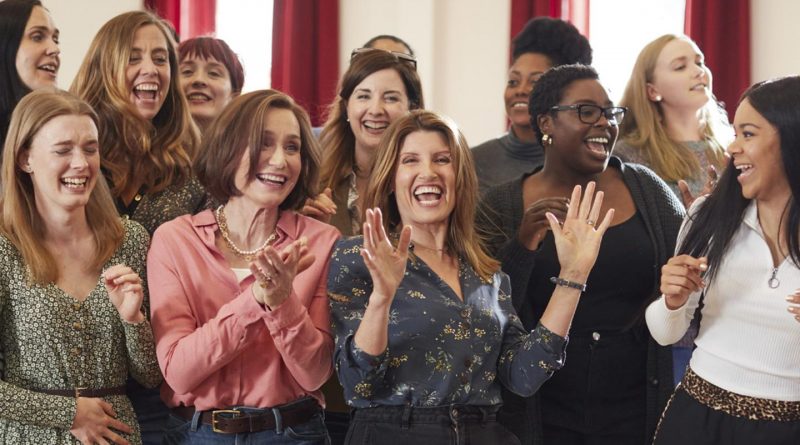 Peter Cattaneo’s Military Wives is one of those films that fits into a very specific genre that includes audience favorites like Calendar Girls and The Full Monty (which Cattaneo also directed). It’s a feel-good movie that’s kind of like a British version of a Lifetime movie: predictable, sometimes cheesy yet, ultimately, irresistible.

Based on the true story of the first military wives choir – a group that went on to inspire 75 others around the world – the film stars Kristin Scott Thomas as Kate, the lonely wife of the Colonel. Having lost her soldier son, she decides to distract herself by getting more involved with the other women on base when the men head off on their latest tour of duty.

However, there’s already someone in charge of keeping up the morale of the wives, and, of course, she couldn’t be more different than Kate. Lisa (Sharon Horgan) is down to earth and fun, while Kate is uptight and formal. Out of respect for her position, Lisa tries to be respectful to Kate but they often butt heads.

When the women finally agree on starting a choir as their group activity, the two leaders have to find a way to work together in harmony. Literally.

The script is formulaic, with all the narrative elements you would expect – one woman is a natural talent, one woman can’t sing at all, a husband is killed in service, the group has a disastrous performance, the group triumphs. None of these are spoilers because there are really no surprises here.

Yet the movie works. The performances are strong, lifting every single choir member above their stereotype to become someone you care about. You root for them to succeed and, thanks to their chemistry as an ensemble, you want to be friends with these women. You can’t help becoming invested.

It’s very moving to see some of the actual military wives choirs at the end of the movie. Their story, which also inspired the BBC series, The Choir: Military Wives, is uplifting. During these challenging times, the group’s motto, “Stronger Together,” really strikes a chord.