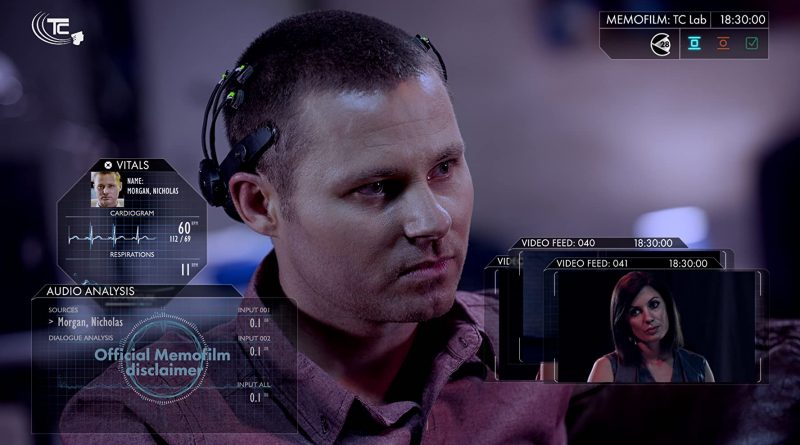 From famous examples such as Brett Leonard’s The Lawnmower Man to David Cronenberg’s eXistenZ, there’s something virtual reality as a subject for science fiction cinema that plants it firmly in the ’90s, a kind of retro throwback to a zeitgeist specific manifestation of the haunted media trope. New media technologies are coming, and they are bad! But even going back to this late 20th century manifestation of the subgenre, it’s worth noting just how strongly women’s voices appear in that conversation: Kathryn Bigelow’s Strange Days is surely as influential as The Lawnmower Man and eXistenz, and all three combined don’t even come close to having the cultural impact of Lilly and Lana Wachowski’s Matrix series.

While I unhesitatingly reject the tendency to reduce a film to an essentialized end-result of its filmmaker’s gender, I do believe that from a critical perspective such an awareness can play into our reception of that text. Enter Eirini Konstantinidou, a filmmaker and cinema academic from the University of Essex, and her film Mnemophrenia, now streaming on Amazon, Tubi, Apple TV, YouTube and Google Play. Premiering at the 2019 Boston Science Fiction Film Festival, Konstantinidou describes her award-winning debut feature as “a self-reflexive film exploring artificial memories and their close relation to the medium of film.”

I confess there’s a very specific kind of anxiety I sometimes feel when watching a film made by an academic; there are few examples of which I won’t be bitchy enough to name where this particular intersection can result in a very particular kind of smugness that makes the film viewing experience somewhat of a struggle. But then there are other examples – such as Mnemophrenia or Donna McRae’s Lost Gully Road (reviewed here) – where the filmmaker’s background and experience in practice-led academic research allows certain projects to flourish in ways they probably could not in other production contexts.

In the case of Mnemophrenia, this is particularly noteworthy as the broadly ‘academic’ textures of the film gel so succinctly and organically with the intellectually rigorous thinking that lies at the film’s thematic core. While we might use the word ‘clinical’ to dismiss another film made in this same context, in the curious instance of Mnemophrenia, this is exactly the point. The film is, from this sense, a powerful example of just how uniquely placed science fiction is to examine not just technology and ethics, but to grant us a particularly rich perspective into broader questions about the very experience of being human and how our relationship to visual culture can feed into that experience.

On a very insightful level, Mnemophrenia effectively defamiliarizes our relationship to the constructed image and asks us to unpack questions about how those images feed into our lives as a broader whole. The film’s title is a word of Konstantinidou’s own creation, defined in the movie as “a condition or a state characterized by the coexistence of real and artificial memories, which affects the subject’s sense of identity.” It is through this idea that we encounter the characters for whom the centrality of the VR experience is fundamental not only to their lived experience, but to their very memories and construction of their own identities. At times verging on a docu-drama in its tone, the film pivots around a number of characters – Jeannette (Freya Berry), Nicholas (Robin King), Douglas (Tim Seyfert), Robyin (Tallulah Sheffield) and Charlie (Robert Milton Wallace) – whose relationships are sometimes clear, and sometimes not.

Set in some indefinable period in the future in a world that is simultaneously familiar but also very different to our own, it is the very opacity of precisely how the journeys of these characters intersect that is the narrative engine of Mnemophrenia. The clue to how that happens is in the very title; some of these characters don’t exist, but rather have been burned into the memories of ‘real’ characters as actual, genuine recollections of past relationships that in fact only played out in a virtual space. Part of our challenge as a viewer is to tease out how these characters fit into that broader story, one structured through more generically familiar elements such as corporate conspiracies and tales of lost loves.

For a low-budget debut feature, Mnemophrenia punches well above its weight; like some of the best genre films, manages to do hell of a lot with very little. While there are clearly larger philosophical questions under the microscope here about human evolution, empathy, technology and ethics, for me the film’s greatest success is how it transcends the specificity of its own explicit subject matter and prompts reflection much more broadly about our relationship to visual culture, the moving image in particular.

Quite unexpectedly, while watching the film I found myself thinking of the misogynist vitriol rebooted franchises such as Star Wars and Ghostbusters received at a perceived ‘feminizing’ of these sacred texts that have carved such a central place not just in the memories but the very identities of a surprising number of men revealed to have some pretty ugly relationships with nostalgia and the sometimes clearly poisonous placement of these ‘screen memories’ that sit in uncomfortably close proximity to their ‘real memories’.

It’s admittedly a jump, perhaps, but it is sometimes a useful critical exercise to let these little lightning bolt moments that seem like random, disconnected associations run their course. Indulging in this line of thinking, I returned (as I so often do) to one of the most underrated and brilliant science fiction films of the 21st century, Kristina Buožytė 2012 movie Vanishing Waves. Absolutely the link between these films is more to do with my own critical impulse to think of other science fiction films directed by women rather than it is any obviously concrete, tangible parallels between the two films, but regardless, this is where my thoughts led me.

And I’m glad they did: like Mnemophrenia, Vanishing Waves in a very different way hinges on destabilizing assumed distinctions between reality and fantasy through technological interventions, resulting in synthetic experiences so powerful that they challenge the dominance of the entire concept of ‘reality’ itself. Mnemophrenia succeeds precisely because of its seemingly objective, clinical surfaces; it’s a challenging and thoughtful interrogation not just of the role of technology in our lives now and in the future, but on how we engage, perceive, feel and remember more broadly.