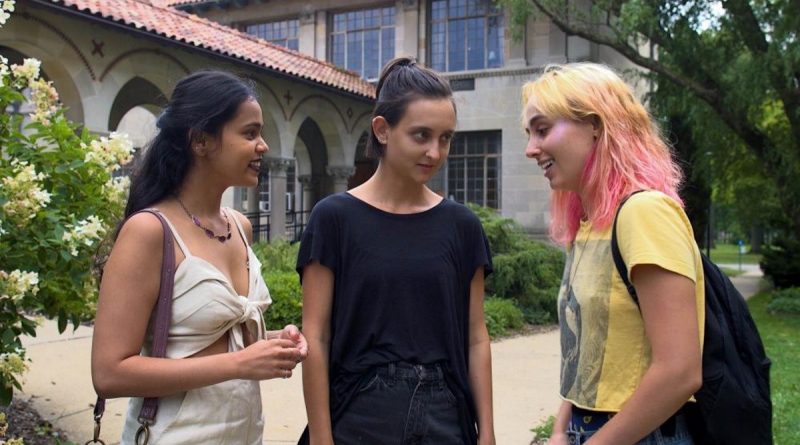 From heady high-school escapades to rambunctious college experiences, the chaos of youth has furnished its own film genre for decades. And, for many a movie made over much of that time, the broad template for teen-focused antics has remained the same, following romantic woes, friendships made and lost, quests to fit in, searches for identity, and the struggle to truly express one’s thoughts and feelings. CRSHD is no great departure, and yet it doesn’t routinely and compliantly slot into an easy niche either. Marking the debut feature of writer/director Emily Crohn, the spirited, energetic and keenly observed comedy gives both a well-worn genre and a staple scenario its own spin — not by serving up much in the way of narrative surprises, but by proudly brandishing its clear personality.

The film’s peppy attitude, offbeat mood and idiosyncratic tone are all firmly on display in its animated opening, which introduces protagonist Izzy Alden (Isabelle Barbier) via a perky, bubblegum-hued computer game-esque sequence. They’re evident in the live-action scenes that follow, too, with the freshman at an Ohio liberal arts college jogging around town and fantasizing wildly and passionately about sudden romantic dalliances with many of the guys that she passes. And, they’re apparent in one of Crohn’s savviest directorial choices: to-camera chats that task the movie’s characters with reading their near non-stop social media interactions — text messages, Facebook comments, Tinder profiles and the like — aloud, emojis included. Something else is obvious in the latter gimmick as well, with CRSHD instantly and repeatedly stressing that, for today’s teens, electronic communication isn’t just plain text on their ever-present, always-glowing screens.

Awkward, lacking confidence and infatuated with the campus’ resident DJ, Nolan (Abdul Seidu), Izzy is days away from finishing her first year, with just two things standing in her way. Tomorrow, she’ll sit her astronomy final, a test she needs to ace to pass the subject, and that she should really spend the evening studying for. Tonight, though, she needs to follow through on a pact she made with one of her best friends, the outgoing and spontaneous Fiona (Sadie Scott). It’s a secret from their third musketeer, Anuka (Deeksha Ketkar), but Izzy has pledged to lose her virginity before the semester is out. As luck would have it, a ‘crush party’ is happening on campus that very night — and she’s hoping it’ll help her fulfill that aim.

For the uninitiated, the rules are as follows: students submit the names of their crushes, who all receive an invite to the party, with entry only open to those chosen and admired few. In tried-and-tested teen film fashion, CRSHD chronicles Izzy, Anuka and Fiona’s enthusiastic efforts to attend, with day-long preparations, eager imbibing and an eventful journey to the actual shindig all on the agenda. While several cinematic predecessors come to mind, the shadow of Booksmart looms large — although CRSHD initially premiered at Tribeca 2019 just a month after Olivia Wilde’s movie did the same at SXSW. Call it a case of twin films, then, with the two features delightfully in sync, yet always approaching a similar scenario with their own flair.

Crafting a strong calling card, Crohn’s film is gleefully high-energy, adoring of its unfiltered main threesome and steeped in their everyday reality — a movie that authentically reflects college life circa 2019 and 2020 rather than merely attempts to (or, as many teen-focused features do, layers it with nostalgia for the adolescent experience of generations gone by rather than truly examining the present). And, as a result, it sports an infectiously entertaining yet also incisive vibe. That’s crucial when, at the plot level, many of the story’s twists and turns are hardly unexpected. An anarchic atmosphere that makes familiar coming-of-age events feel genuine can make a significant difference, and it does just that here.

Fleshed-out characters can and do have the same effect; it’s to Barbier, Ketkar and Scott’s credit that, when narrative arcs take a predictable path, which is often, just how their characters will react is still a constant surprise. Indeed, the trio’s performances ripple with this immensely likeable film’s best traits — personality and authenticity — with Barbier an engaging lead, Ketkar bringing spark to the movie’s worst subplot and Scott a particular scene-stealer.