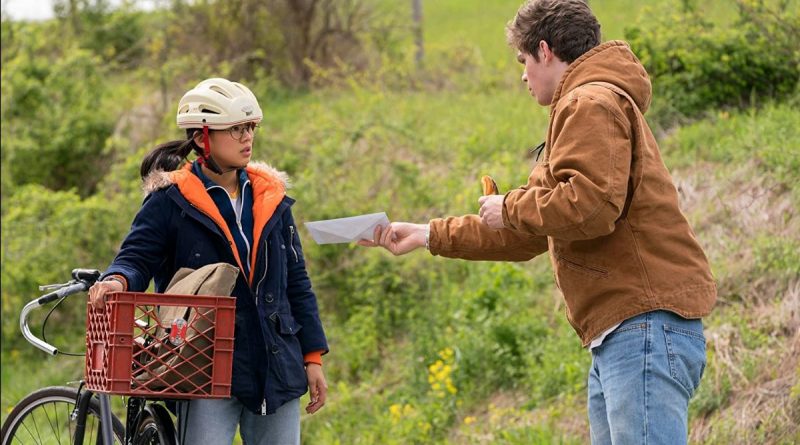 Sixteen years after her filmmaking debut Saving Face, writer/director Alice Wu returns with The Half of It. That’s the type of gap that sadly proves all-too-common on the resumes of female directors, yet rarely plagues their male counterparts as often. And, it’s the kind of chasm that makes viewers mourn for what could’ve been — for all the great movies that might’ve graced the screen over that period, but haven’t. Indeed, the latter sensation echoes strongly while watching The Half of It, which infuses a tale that may have felt overly familiar with intelligence, perceptiveness and charm. In fact, the same sentiment remains for the entire duration of Wu’s Tribeca-winning movie, with her film taking home this year’s Best Narrative Feature prize even in the absence of a physical event.

In opening narration lifted from the wise and witty essays that she writes for her classmates — for money, and with the full knowledge of the teacher who’s trying to encourage her to apply to an out-of-town college — Ellie Chu (Leah Lewis) opines about romance. Moments later, though, the Chinese American straight-A student stresses that The Half of It isn’t a love story. She isn’t wrong; although affairs of the heart guide this Cyrano de Bergerac-esque story, it’s a coming-of-age account of finding one’s sense of identity first and foremost. That said, Ellie, her neighbour Paul Munsky (Daniel Diemer) and his crush Aster Flores (Alexxis Lemire) are all pushed down the path of teen self-discovery by their lusty stirrings.

Attempting to capitalize upon Ellie’s homework hustle, Paul approaches her with a request: that she write a love letter to Aster, expressing the adoration he can’t quite manage to put into words himself. Ellie is reluctant but, after she agrees and Aster writes back, the trio falls into a comfortable regular pattern. Along the way, Ellie and Paul’s friendship blossoms, a side effect of spending so much time in close quarters, his penchant for experimenting with making sausages, and his willingness to watch old movies with Ellie and her dad (Collin Chou). For Paul’s physical encounters with Aster, she also schools him about art and literature; however, as well as growing close to her new pal, she secretly shares the same object of affection.

Adolescent love triangles are a staple of high school-set antics, as are clandestine feelings, awkward new connections, everyday bullying and dreaming of futures that appear out of reach — all elements of The Half of It. Yet Wu never lets any aspect of her sophomore feature seem routine, and that’s no minor feat in a heaving genre that adds to its ranks with frequency. The key, or at least the main strategy: complex, conflict-riddled yet wholly relatable characters. They might be navigating scenarios that’d usually possess a been-there, done-that air, but Ellie, Paul and Aster are as layered and textured a threesome of high-schoolers as viewers are ever likely to see on-screen. And, as always, thoughtful, fleshed-out characters (and charismatic performances to match) go a long way.

Tackling a range of weighty topics — closeted teen sexuality, religious intolerance, immigration and xenophobia, expectations of masculinity, and the lingering impact of loss among them — The Half of It’s highlights don’t end there. Wu finds a tone that’s sweet and yearning yet grounded and buoyant, a delicate balancing act that she always pulls off to the film’s benefit. As a result, this is a movie that ponders Ellie, Paul and Aster’s problems deeply, but also enjoys wandering through the ups and downs of teen life. Cue a feature that’s tender and smart, raw and reflective, and also entertaining all at once. It’s also lensed to look and feel lived-in, rather than sporting a thick coat of gloss, another touch that makes a visible difference.

Forget satire or a tongue-in-cheek attitude, as nicely as it worked for genre stalwarts such as Clueless and Mean Girls. Forget easy formula, too. A Netflix film, The Half of It finds a cozy niche between two of the streaming platform’s other astute tales of youth from recent years: documentary Shirkers and rom-com series To All the Boys I’ve Loved Before (and its sequel). In the process, Wu demonstrates overwhelming respect for the importance of her story and its characters — particularly Ellie’s sexuality, which is handled in a matter-of-fact but emotionally incisive way, as is her intricate home dynamic with her grieving stationmaster father. This is a heartfelt, clever and insightful film that always values the life-shaping, personality-defining ebbs and flows of adolescent chaos, while knowing that even the most universal of tales and experiences resonate best when they’re at their most genuine.