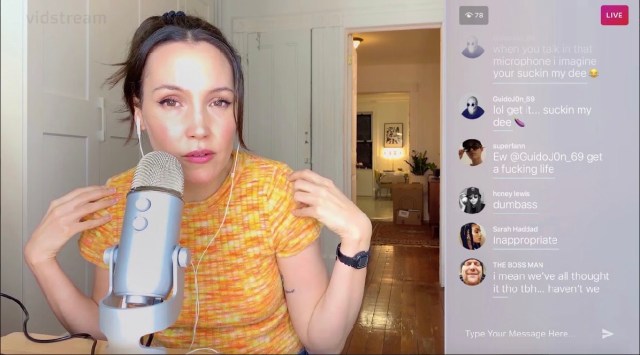 Tingle Monsters is a short film that wows for many reasons. Tackling online abuse in a new and frightening way through the gaze of horror and ASMR. For those who don’t know what ASMR is, well, it’s a popular YouTube phenomenon that might seem strange for anyone on the outside. It stands for Autonomous Sensory Meridian Response. An ASMR artist will use highly sensitive microphones, usually whispering into them, sometimes using objects to make intense noises, or tapping on the microphone to cause a sensation in the brain often referred to as tingles. It is intended to produce euphoria. Many people use ASMR to relax or fall asleep. But like any instance where a woman puts herself in the public eye, she is subjected to harassment and sexualized no matter what her intentions may be. Since the beginning of the internet, women, in particular, are made to feel small, powerless, and the danger is very real.

Filmmaker Alexandra Serio pulls from personal experiences to tell a terrifying tale that taps into the gross culture of certain individuals hiding behind a keyboard. Here is my interview with Serio and the trailer below. You can watch Tingle Monsters on Vimeo tomorrow! Continue reading on I SCREAM YOU SCREAM.