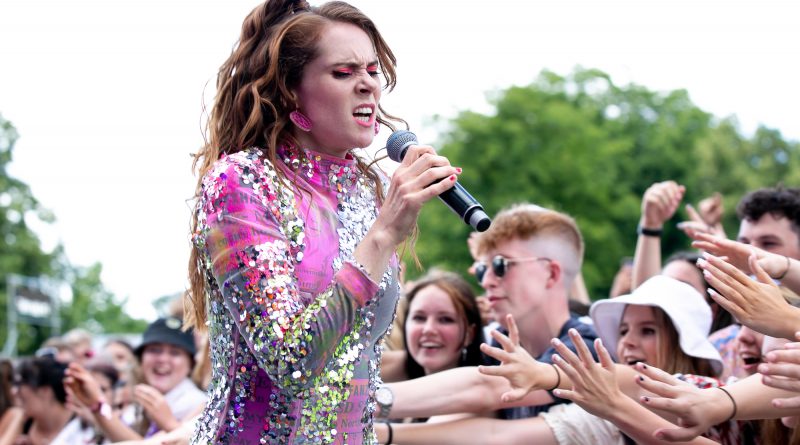 As musical biopics go, Amy Goldstein’s Kate Nash: Underestimate the Girl is what would happen if American Idol’s backstories of its aspiring singing contestants had less heart-tugging sob content and more honesty about how becoming a chart-topping star is not quite what it is cracked up to be these days. That is especially true for females in the industry, no matter how fiercely feminist they are. For example, right now in your news feed you can just google “Miley Cyrus” and find a garbage story about how her “quarantini bikini” has been declared “unhygienic” by the masses.

I have to say I have never heard of this British pop artist until now (although right after watching the doc, I finally caught up with a few episodes of GLOW, her streaming show about ‘80s female wrestlers). This attractive outgoing singer-songwriter, who looks like a combo of Kristin Wiig and Nicole Kidman, came of age in the era of MySpace, which became her entrée onto the music charts with her sleeper hit 2007 single Foundations. A No. 1 album in the UK and an award for Best British Female Artist at the 2008 Brit awards followed. But then her major label abruptly dropped her. And her struggles to continue to be an artist became very real.

The footage of her concerts shows is steeped in DIY aesthetics – lots of glitter, spangles and tulle — and pumped up by riot grrrl energy with her all-girl band and a fan base that is primarily female. Nash has the pipes, the charisma, the energy and the talent to fill an arena but must make do with small venues with few frills. The camera follows her to Los Angeles as she attempts to fund her career by writing songs for others and recording commercials. But it is Nash’s refreshing honesty and willingness to share her ups and downs – including selling bags and bags of clothes for quick cash — and flagging fame experience in the moment on screen that provide the most riveting moments.

A late-arriving betrayal by her manager is a kick in the gut, but Nash manages to eventually win this round just by standing her ground. As the doc concludes, Nash has moved back to Los Angeles after winning her role on GLOW, somewhat richer and quite a bit wiser about the fickle vagaries of showbiz.