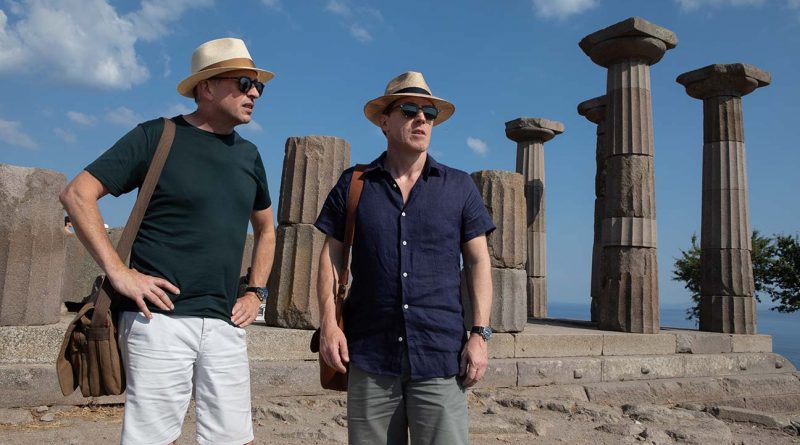 As the fourth and, some say, final installment in The Trip series, The Trip to Greece is a weird and worthy excursion. Like the first three, A Trip to Greece dandles fiction and non-fiction, improvisation and storytelling. You have to really like the bantering boys, Steve Coogan and Rob Brydon.

You have to really like the concept of male friendship, herein modeled in the way two old boys nudge, riff, mansplain, and joke. They are experts in the Department of Silly Talks. They improvise and compete as they play their practiced parts. Both men (both 55) are veddy British comedians in the broadest sense.

This fourth Trip film lets go of the conceit of two blokes reviewing restaurants even though they know doodly about food. The Trip to Spain and The Trip to Italy dragged that toy along, but in Greece, even with the occasional dip into kitchens, the boys are all about history, what they learned in school about the classics.

They keep trying to impress each other, and true, that can get boring, just as it does when two men try to top each other in person. These two men also imitate fellow actors. Brydon’s Schwarzenegger elides to Werner Herzog, and the two rehearse Dustin Hoffman and Lawrence Olivier in The Marathon Man when they get to Marathon, Greece.

They jab at each other’s careers. Coogan extends his career in comedy, as in Alan Partridge, by referring bloody often to his Baftas as if they were loved ones, setting up his Trip character as annoying and intolerable and asinine.

He also extends his career in tragedy, such as Philomena and Stan and Ollie. The Trip to GreeceTrip films, knows how to juxtapose those genres with the beauty of Greece (under James Clarke’s cinematography) accompanied by romantic music. Most of all, The Trip to Greece wields wordplay as swordplay. It is to laugh — and cry.

The Trip to Greece is available on cable and digital on-demand.