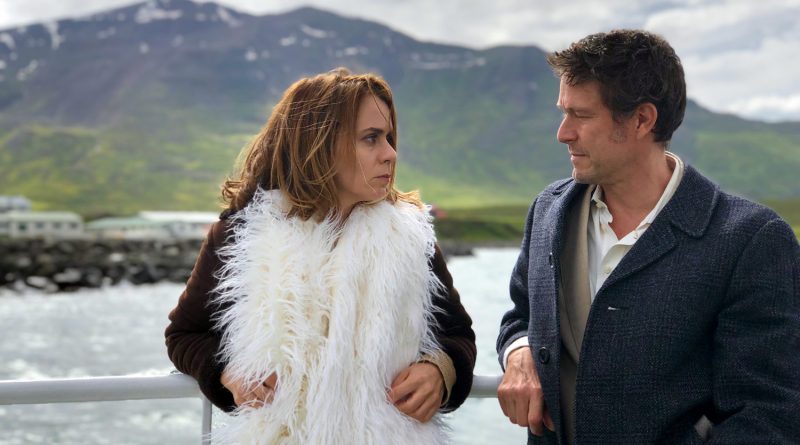 Snaeland literally means snow land, and the word is historically and poetically used to refer to Iceland, the gorgeous setting of writer/director Lise Raven’s latest film.

It would be satisfying enough to just spend 75 minutes getting lost in the stunning cinematography but this is not a National Geographic special, and its unique story will give you a lot to think about.

First of all, it’s noir-inspired, which is a real cinematic feat considering the movie takes place during that time of year when Iceland experiences 24-hours of daylight. The contrast between the endless light and the dark secrets hidden beneath the surface give the movie an especially ominous tone.

Snaeland takes place in the small fishing village of Olafsfjordur, where disgraced journalist Fred (Frank Bruckner) has traveled on assignment. We first see him in the back seat of a cab, explaining that he works for a big German newspaper and asking his driver to pick him up early so he can cover Jonsmessa, a mid-summer event “where people roll around the wet grass at midnight.”

His driver, Oskar (Vikingur Krist Jansson), smiles to himself and gives Fred a little side eye but ends up becoming his guide to the area. He introduces him to his wife, Melanie (Emily Behr), who looks familiar to Fred. He becomes convinced she is actually Jeannine Renard – a French nanny accused of killing a baby and believed to be long dead herself.

Fred calls his editor, who basically laughs at him and tells him to concentrate on his assignment. She admits she only hired him as an excuse to have sex with him and reminds him what a loser he is. (Fred paces his hotel room in full frontal nudity for this entire conversation, and I’m not sure what this is supposed to add to the film.)

Determined to get the scoop that could revive his career, Fred ingratiates himself into the couple’s life and must ultimately decide whether or not it’s his right or responsibility to tell someone else’s story.

It’s a really thought-provoking question, as is the idea of second chances. Who deserves one? Who actually gets one? Who makes that decision?

Raven found a perfect metaphor for her film in Melanie’s words as a beekeeper in Iceland. “We isolate our bees from the rest of the world,” she says, “to protect them from invading species that could cause the colony to collapse.”

Journalist Fred is indeed that invading species, and he will always be an outsider. Thanks to Raven, though, we are let in, given access to this closed community and tempted to book the next flight to Snaeland.