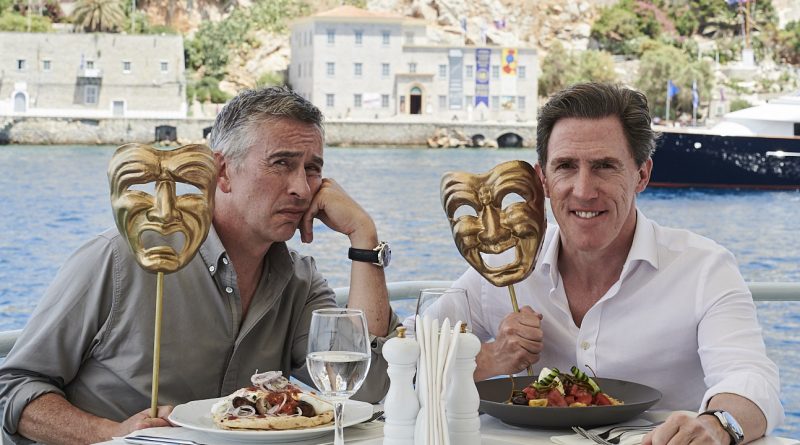 It’s a moment that had to happen: Rob Brydon, playing passenger to his frequent comedy collaborator Steve Coogan, singing the Bee Gees-written, Frankie Valli-performed 1978 track Grease while driving through Greece on the pair’s latest working holiday. As acerbic as ever, and as unwilling to humour his long-term pal’s good-natured silliness, Coogan naturally points out that Grease, in song, musical and movie form, has nothing to do with Greece, the place. But still Brydon sings. He visibly relishes the banter with Coogan about his crooning, just as he enjoys the opportunity to pull off yet another impression. Whether the scene was improvised, as much of the The Trip movies are, or whether it was the first thing that sprang to Coogan, Brydon and writer/director Michael Winterbottom’s minds when they decided to make the fourth installment in this enjoyable comic travelogue series, it’s a delight.

It also highlights one of the reasons that The Trip to Greece and its three predecessors have kept regaling audiences, and kept coming back, too. Watching famous faces visit scenic places has become a culinary and travel TV show genre of its own, but in this series — with each chapter airing as six-part TV shows in the UK, then released in a condensed, feature-length version across the rest of the globe — it’s particularly amiable, affable and entertaining. Here, riffing on their real-life personas, trading comic bits, and reflecting upon fame, life and the intersection of the two all proves a pleasant and savvy combination in Coogan and Brydon’s hands. Their knack for bouncing off of one another was already well-established in Tristram Shandy: A Cock and Bull Story, also directed by Winterbottom, but it’s their ability to use their fictionalised selves to serve up conversation-fueled insights about both celebrity and everyday existence, as well as the reality of getting older but not necessarily wiser or more mature, that’s made a lasting impact in 2010’s The Trip, 2014’s The Trip to Italy, 2017’s The Trip to Spain and now this.

In what’s been badged as the saga’s last hurrah, Coogan and Brydon have once again been sent on assignment by British paper The Observer, continuing what’s become a familiar formula by now. Their job: to journey around their destination, eat gourmet cuisine in fancy restaurants with jaw-dropping views, spend their time between meals seeing the impressively picturesque and history-laden sights, and then write an article about the whole experience. Always intent on stressing his intellectual prowess (and his sense of superiority), Coogan has decided to frame this jaunt around Homer, famed Greek hero Odysseus, and the ten-year trip from Troy to Ithaca chronicled in The Odyssey. Accordingly, the two funny men start in Turkey, with Coogan yelling his Alan Partridge catchphrase “a-ha!” from a Trojan horse. Then, they leisurely make their way to the second-smallest Ionian Island — via the likes of Kavala, Athens, Marathon and Hydra, and while swapping Mick Jagger, Dustin Hoffman and Werner Herzog mimicry at each stop along the way.

It’s taken Coogan, Brydon and Winterbottom ten years to get to this point, too, albeit after starting with a tour of the north of England all that time ago. That’s not the only purposeful parallel with The Odyssey that the two actors and their director weave into The Trip to Greece, which ruminates thoughtfully on the notion of going home like the epic poem. Within the film franchise, family man Brydon has always boasted his wife and children as an anchor, while Coogan’s personal life has featured less structure and fewer ties — so what they’re leaving when they venture the world on these playful jaunts, and what they’re returning to as well, has always differed. Each film has made that plain in its own way, allowing each exaggerated version of the series’ two stars to weather ups and downs in the process; however in The Trip to Greece, Brydon’s settled-down existence and Coogan’s looser relationships lead to a conclusion that’s joyous for one and melancholy for the other.

Accordingly, beneath the comic bickering and competitiveness, Coogan and Brydon ensure their on-screen alter egos feel like real people, as well as performers that audiences enjoy spending time with — and might like to trek around the Mediterranean and share plates of seafood with, too. They’re still stars who brag about having seven BAFTAs and lament not being cast in Damien Chazelle’s latest film (in Coogan’s case), or whip out their go-to “small man in a box” routine and reminisce about once losing a role to Ray Winstone (in Brydon’s case), but the perception of naturalism shines brightly nonetheless. And, while the gags and constant back-and-forth once again tickle funny bones, and the travel and food porn-style shots of gorgeous scenery and delicious-looking meals instantly incite both wanderlust and hunger, it’s the ins and outs of Coogan and Brydon’s fictionalised lives, and their dynamic with each other, that remains the constant drawcard.

That’s another reason that The Trip series has always struck a chord as it trots out easy chapter after easy chapter: while packaged as a light getaway with two renowned comedians who argue about whether one of them is a serious actor and the other a mere ‘light entertainer,’ it always finds a way to dive deeper. The Trip to Greece also shows its stars trying to one-up each other in a swimming race against craggy coastlines, of course — but like Brydon singing Grease in Greece, that’s firmly to be expected by now, even in this bittersweet concluding outing.