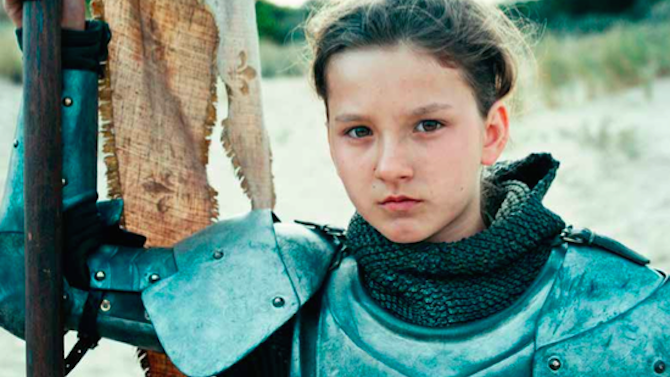 When The Passion of Joan of Arc reached cinemas in 1928, Renée Jeanne Falconetti’s face burned a place in film history. Playing the famed heroine and martyr, and staring towards the camera during her character’s interrogation, her soulful, devoted, defiant gaze became one of the most iconic images ever immortalised by the medium. Over the near-century since, that hasn’t stopped many a filmmaker from trying to emulate Carl Theodore Dreyer’s masterpiece, resulting in a lengthy list of features — by Victor Fleming, Roberto Rossellini, Otto Preminger, Robert Bresson, Jacques Rivette and Luc Besson, to name a few — endeavoring to endear their own version of Joan to the world. But, despite the talent involved on-screen and off, nothing has ever come close.

Bruno Dumont’s Joan of Arc and its 2017 predecessor, Jeannette: the Childhood of Joan of Arc, don’t either; however they do gift cinema another superb performance by another expressive and engaging leading lady. She isn’t yet a teenager, but Lise Leplat Prudhomme proves an on-screen force, whether singing and dancing through Joan’s formative years in Jeanette or facing death in Joan. In reality, the then-warrior, now-canonised saint was approximately 19 when she met her end, but the fact that Prudhomme is visibly far younger doesn’t temper the potency of her portrayal. A great on-screen Maid of Orléans must be steely and resolute yet impassioned and empathetic, and when she is — as Prudhomme clearly is — she instantly commands attention.

That’s the case from the outset of Joan of Arc. Both the film and its star make their presence known early, in a scene that’s hardly included by coincidence. With synth-infused pop music swirling, and with French singer-songwriter Christophe crooning the thoughts of its titular character along with it, Prudhomme’s armour-adorned Joan locks her eyes on the centre of the frame and doesn’t look away. For those who didn’t see Jeannette, it establishes her unflinching commitment to her God-guided battle against the English with simple ease. For viewers who did, it conveys her transformation — from that movie’s questioning child seeking guidance from the heavens, to this feature’s authoritative leader of the King of France’s army. And, obviously, it nods back firmly to where celluloid depictions of the real-life figure started. This isn’t the only time that Prudhomme’s Joan peers into the lens, and each time she does, she hammers home that connection.

Like The Passion of Joan of Arc, Dumont’s latest film is primarily concerned with its eponymous subject’s capture by the Burgundians as the Hundred Years’ War kept raging, as well as her subsequent trial by the disapproving Church elders for heresy. Like Jeannette, it draws from Charles Péguy’s The Mystery of the Charity of Joan of Arc, and structures its contents around a series of lengthy conversations. Plot-wise, there’s not much more to it, with philosophical, ideological and spiritual debates featuring heavily, and the fervent Joan holding strong. Unlike Jeannette, the dialogue isn’t set and sung to heavy rock tunes, because Dumont hasn’t crafted a musical with hair-thrashing nuns this time — a change befitting the shift in focus from the first movie’s religious awakening to this feature’s religious persecution.

Talk is plentiful, though not always innately gripping, particularly in a film that clocks in at 137 minutes. But all that chatter about Joan’s tactics, mission, soul, integrity and ultimate fate bears all the more thematic import due to Prudhomme, even when the banter meanders. At its core, the story of Joan of Arc is the story of a young woman forced into conflict with a system that refuses to recognize or respect her. Accordingly, by making his audience see Joan as a girl — because she’s literally being played by a girl — the enormous chasm between the two sides couldn’t be more evident. It’s impossible not to feel the full weight of Joan’s tale in the process, a sensation aided by the cathedral setting so prominently used for Joan of Arc’s second and third acts. Also, that she’s constantly called a “child” by her dismissive accusers and inquisitors never escapes notice.

Whether he’s exploring the eccentricities of a small town in murder-mystery mini-series L’il Quinquin and its follow-up Coincoin and the Extra-Humans, or venturing back to the 15th century here and in Jeannette, longer-form storytelling generally suits Dumont, however. The French filmmaker’s work typically benefits from having room to breathe, to sprawl, to let its rhythm unfurl — to pay attention to idiosyncratic characters, striking locales and eye-catching visual compositions, too — which is often when his best flourishes occur. And here, if Joan of Arc didn’t reach a running time that threatens to test viewers’ patience, some of its most memorable absurdist and aesthetic touches mightn’t have made the cut. As a result, an intriguing, occasionally entrancing film would’ve lost some of its modest but still apparent power. Dumont’s bird’s-eye rendering of war as dressage, for example, may canter a few beats too long, but it also mesmerises. The lingering in Joan’s trial venue may become repetitive, and cinematographer David Chambille’s roving over its ornate details as well, but its majesty is worth bathing in. And, even as it relays an outcome everyone knows is coming, Joan of Arc’s still-surprising and stunning final shot wouldn’t have had the same impact either.

EDITOR’S NOTE: Joan of Arc is featured on AWFJ’s REAL REEL WOMEN List of iconic women whose stories are told in narrative feature films. The Joan of Arc blurb, written by Kimberley Jones, includes reference to all of the films about the Maid of Orleans.