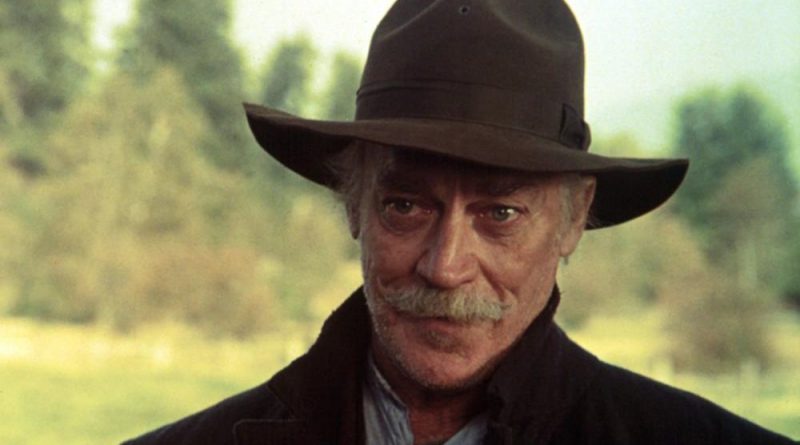 Newly restored and rereleased, The Grey Fox charms and entertains with a Gentleman Bandit.

The first minutes of the 1982 film The Grey Fox clearly establish that director Phillip Borsos has a fascinating, true story to tell and a creative way to present it. The opening, black-and-white shots of a stagecoach racing through a dusty Monument Valley and the subsequent robbery of the passengers come from cinema’s earliest images.

Sandwiched between these two dynamic events, titles introduce American Bill Miner, mastermind of twenty-six stagecoach robberies beginning in 1863 at age sixteen, continuing for eighteen years. Dubbed The Gentleman Bandit by the Pinkertons and credited with originating the command ‘Hands Up!,’ Miner was released from San Quentin Prison in 1901 after serving 33 years. Now introducing himself as George Edwards, Miner visits his daughter in Washington State and soon moves on to execute the first train robbery in Canada’s history in 1904, inspired by his watching Edwin S. Porter’s 1903 film, The Great Train Robbery. He and his partner lying low with their stolen money, Miner retires to a quiet life in Kamloops, British Columbia, with work as a miner for his cover.

No spoilers here, but subsequent events involve his two criminal partners, a feminist photographer with whom he falls in love (based on the real Mary Spencer), and the Pinkertons on his trail. Solid character development takes center stage against the backdrop of British Columbia and Washington State locations captured idyllically by cinematographer Frank Tidy. Editor Frank Irvine sculpts this 91-minutes, developing events without histrionics (what a refreshing change) with music by The Chieftains enhancing the atmosphere.

But the film belongs to the immensely engaging Richard Farnsworth as Bill Miner aka George Edwards. Through an array of close-up reaction shots, Farnsworth holds the screen. The camera loves him as he watches people and places as closely as a man hiding in plain sight must. Farnsworth exudes warmth and wariness in equal measure, thoughtfully assessing his risks and security. Director Borsos knows he has a star and makes the most of any rooting for this Gentleman Bandit. I applaud the elegance, the masterful development of events, and, for sure, the nostalgia.

Multi-award winning, recently restored, The Grey Fox is streaming on the Kino Lorber website beginning May 29.