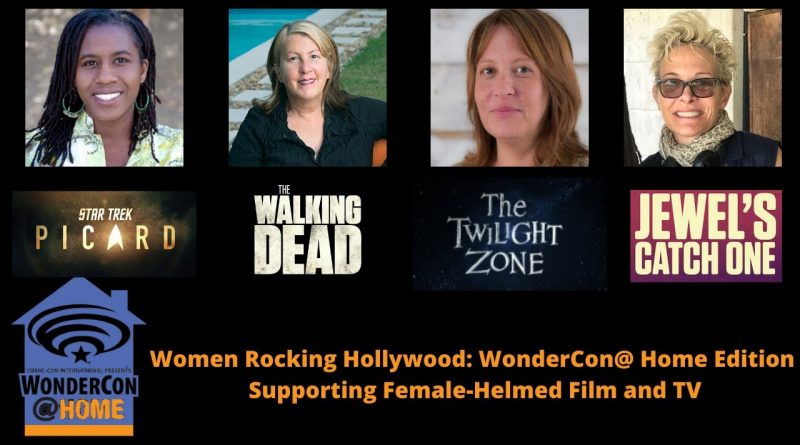 Things are changing in Hollywood, albeit slowly. I’d like to think that the annual Women Rocking Hollywood all-female panel at San Diego Comic Con has contributed to the change.

When I established the Women Rocking Hollywood panel in 2014, it was a first. And it was a huge success. Not only was the room packed with enthusiasts, there were more than 500 fans waiting outside the doors, clamoring to get in.

And, although the panel keeps being moved to a larger room, there is always a line of people waiting to get in. It’s clear that there’s an important place for Women Rocking Hollywood at SDCC and other pop culture cons. So this year, for the first time, I decided to add WonderCon, Comic-Con International’s other convention, which is sister to SDCC and is held annually in Anaheim.

In this year’s preparations for both cons, for the first time, studios and production companies reached out to me to pitch participation by female directors of their shows. My plans for WonderCon and San Diego Comic-Con fell into place very easily and early. I was thrilled. Then the pandemic happened.

Like all 2020 con events, this year’s edition of the live panel fell victim to the coronavirus pandemic. It was heartbreaking. But opportunity to go virtual came from Comic-Con International organizers whey they announced they’d stage a virtual con, presenting select panels that were filmed remotely.

Although production had halted, shows had been delayed, and movie premieres were frozen — with no clear path as to how or when they’d be rescheduled — everyone who’d had committed to the Women Rocking Hollywood panel was game to take part. They’d participate remotely, but most had no idea when their films would see release. So, with WonderCon meant to happen in April, I had to scramble to reset my roster. Fortunately, I knew some wonderful movie making women who had shows that were either currently streaming or premiering soon. A virtual panel came together with some very talented directors.

Joining the panel, Jen McGowan talks about her indie hit Rust Creek, which is streaming on Starz, and her guest direction on the second season of The Twilight Zone. Hanelle Culpepper, the first woman to launch a new Star Trek series in its 53 year history with the pilot of Star Trek: Picard, and also directed two episodes of NOS4A2 season 2, speaks about her casting and aesthetic choices for Picard. C Fitz chats about her experience with the Ava Effect and directing on Queen Sugar, as well as her documentary Jewel’s Catch One, which is currently on Netflix. Rosemary Rodriguez discusses not only her experience directing on The Walking Dead, she also talks about the new series from Apple TV+, Home Before Dark, on which she both produced and directed.

The plan was to have someone representing Women in Film: LA, and that was happening all the way up to days before, but fate had other things in store, and I had to speak about their programs, which, I have to say, freaked me out a bit. It’s hard enough to do a virtual panel on Zoom without having to remember stats and info, but I shouldn’t have worried, I remembered what was necessary. That being said, since they couldn’t take part, I urge you all to check out Women in Film: LA and the ReFrame Project, especially if you’re someone who dreams of filmmaking as a profession. They have so many resources and programs that help female filmmakers. They also have a COVID-19 resource page on their Website

I still don’t know what will happen regarding a virtual version for San Diego Comic-Con, or what will happen next year. Things were so much easier this year, and I’m hoping that support from networks, production companies, and studios will continue. Every year we’ve had a live panel, we have as many as a thousand people who can’t get in, and get standing ovations from our audience. Young filmmakers I encounter with the panelists afterwords sometimes tear up, they find the panel so inspirational and compelling. We don’t get to see that with virtual panels. Still, watching the panel, viewers will learn a lot about these filmmakers and their projects, and how they relate their experiences is definitely inspirational.

I love doing Women Rocking Hollywood. If this year means we do it via computer, at least fans and aspiring filmmakers get to learn something while they wait out the pandemic. Hopefully some of them will be able to join me live in 2021.