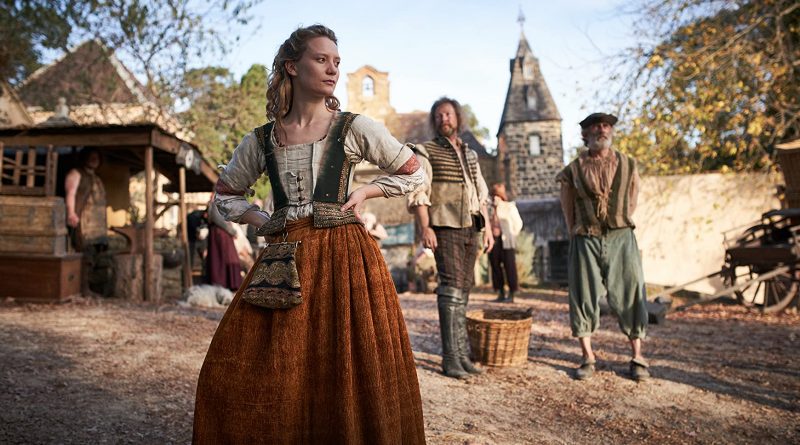 A fresh and decidedly feminist take on the classic 16th century puppet show Punch and Judy, Judy & Punch is alternately gorgeous and lyrical, and excruciating to watch. First-time feature director and screenwriter Mirrah Foulkes is coming in hot, with fearless, bracing scenes that will long be etched into viewers’ memories, crafting a very Grimm tale of the ‘woman behind the man’. Judy is ever-challenged and made low by Punch’s emotional and physical abuse, and his ability to rob her talents and put himself in the spotlight. She is part of a world both old and new, where women toil largely in silence, are vilified when they excel in a craft or skill that eclipse the abilities of the men around them, and are bullied into creating, while the men take credit for those creations.

Mia Wasikowska stars as Judy, a young wife and mother, married to Punch, played by Damon Herriman. Punch has been drinking away the success she has helped bring to them with her superior puppetry skills. When his irresponsibility leads to tragedy, she yearns for revenge. In this landlocked town inexplicably named Seaside, the magic tricks Judy has learned to entertain the children may catch the attention of the men of the village. They are thirsty for woman to label ‘witch’, and feature on their “Stoning Day”, and Judy might follow the one whose chickens died all on one night, or the one that stared too long at the moon the previous week.

There are moments in the film that deserve a trigger warning. Those who shy away from morality tales using story as blunt metaphor will have to trust that Foulkes has a bigger plan, one that requires extremely dark moments to shine the light on greater truths. There is violence towards those seen as “other”, and they are almost exclusively women. Being differently abled, a crone, preferring the company of other women, being a healer, or a host of other odd qualities means being at risk of death..… Those who terrify the patriarchal powers-that-be are to be denounced. They must be stripped of their power, and if all else fails, killed into silence.

How Foulkes presents her message is sometimes a bit heavy-handed. Still, Judy & Punch is ambitious, and achieves far more than one would expect, given the strong feminist, female-centric point of view the writer/director is expressing through her story and characters.

Ultimately, Judy & Punch reminds us that, then and now, women are never at home. As a quote central to the story says, “What is a witch, but a person who sits just outside your blinkered view of the world?” Foulkes has created a fascinating fairy tale from the female perspective, and we should all be excited to see what she brings us next.