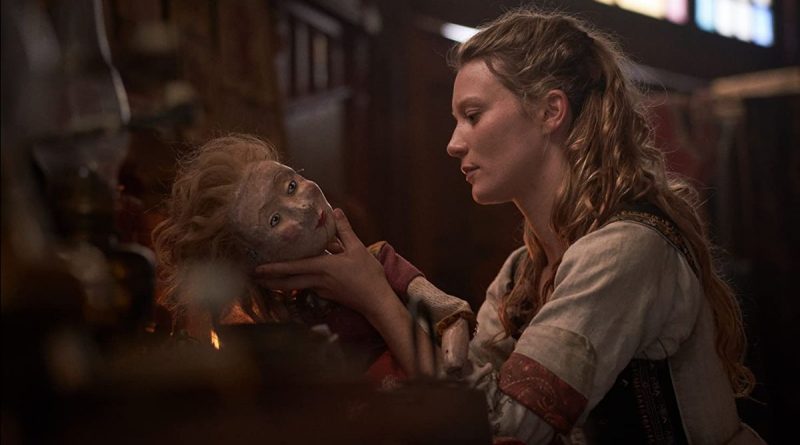 Judy & Punch is a fantastical revenge empowerment satire and scabrous social commentary on violence and misogyny.

Mirrah Foulkes’s debut feature, set in a mythical medieval town called Seaside, is a fairy tale of a very grim sort. The boisterous locals that gather for a puppet show cheer loudest when the male marionette batters his wife, which delights puppeteer Punch (Damon Herriman) but makes his wife and creative partner Judy (Mia Wasikowska) squeamish.

In the morning, the townsfolk rush to participate in the public stoning of three women accused of witchy transgressions such as staring at the moon. Punch, a drunkard and womanizer, is happy to oblige by hurling a boulder while an increasingly appalled Judy, who turns out to be the real talent behind the puppet show — surprise, surprise — silently storms off with their infant daughter. The gleeful stoning is a gruesome sight and it gets worse. Drunk and guilt-ridden for causing the death of the baby, Punch ends up beating Judy to a pulp and disposes of her body. Then he plays upon the village’s fear of sorcery and charges a quiet local elderly couple (played by Brenda Palmer and Terry Norris) with murder.

But Judy, badly hurt but still alive, has been taken by local children to a remote camp populated by heretics and other castoffs. When she recovers from her injuries, she plots her revenge. The film has great fun with anachronisms and twists on familiar fables.

Wasikowska is perfect as the young Seaside native who, charmed by Punch, once ran away with him. Now she’s grown from disenchanted to downright enraged not just at him but at the system that enables him. Her awakening and righteous indignation makes Judy & Punch a wildly imaginative and powerfully relevant fractured fairy tale.