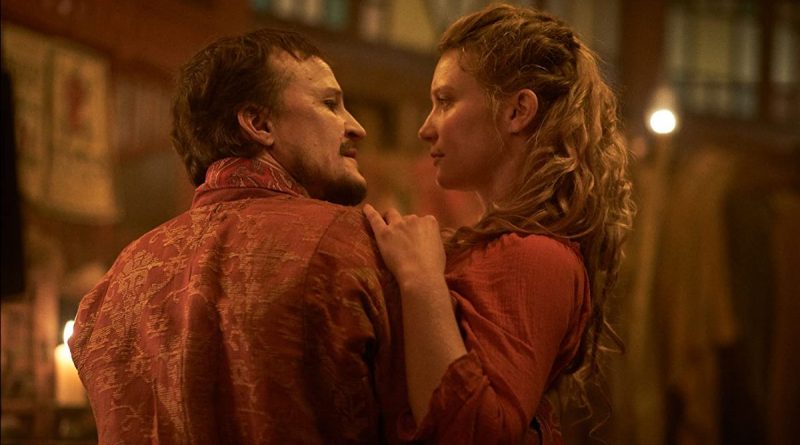 Judy & Punch is a none-too-subtle #MeToo fairy tale that is part Brothers Grimm and part Shakespeare with a pinch of Monty Python tomfoolery. Consider the fact that it is set in a 17th-century village named Seaside that is nowhere near the sea. First-time director Mirrah Foulkes at least doesn’t play it safe with her script as she freely tosses about such anachronistic phrases as “incoming” and “We killed it tonight!” while injecting a Leonard Cohen ballad – namely Who Should I Say is Calling? — into the proceedings as well as a bout of tai chi and electronic background music.

Yes, there will be marionettes and they are manipulated by Mia Wasikowska as Judy, a dedicated mother to an adorable baby girl who lives in her family’s home with her boozehound husband Punch – played by Damon Herriman — whose charismatic nature turns violent and abusive whenever he goes on a bender. He proclaims himself “the greatest puppeteer of his generation” while Judy is the actual master of pulling the strings on stage when they deliver their abusive slapstick displays.

Herriman, an actor who seems to have slime coursing through his veins, practically has “toxic male” stamped on his forehead. Thankfully, Wasikowska is allowed to deliver a tender and tough nuanced turn, especially when the plot suddenly takes a tragic path that ends up killing her child and causes her to be left for dead in the woods. That is when Judy goes into warrior mode when she joins a crew of outcasts who nurse her back to health and help her seek revenge on the one that wronged her in a stroke of grand theater and righteous anger that takes a stand against mob rule and injustice. Foulkes’ debut is more a curiosity than it is a fully entertaining film but its heart is in the right place.