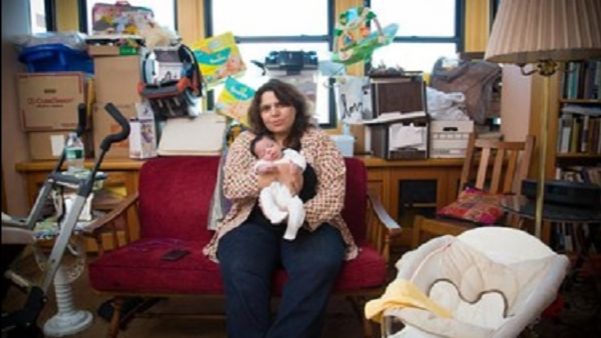 It’s true of personal essays, and it remains the same with personal documentaries: when someone turns their chosen artform on themselves, either via penning words or pointing a camera in their own direction, it can play as indulgent. While that sometimes feels the case with Judith Helfand’s Love & Stuff, the documentarian behind A Healthy Baby Girl, Everything’s Cool and Cooked: Survival by Zip Code relays both a highly intimate and unshakably universal story. This is a tale of one woman sifting through her life, and literally sorting through the physical items that were part of her mother’s existence. It’s an account of tackling parenthood while saying goodbye to the woman that brought her into the world. It’s also a chronicle of the long-lingering aftershocks left by life-changing events, and the way they can shape decades of decisions. Every moment is specific to Helfand, yet emotionally also expands far beyond just one woman’s experience.

Love & Stuff begins with home-video footage of Helfand and her mother Florence, and with the declaration that the former didn’t set out to make documentaries about the latter. In other words, the films starts with a glimpse at their bond and an admission that, until now, Helfand hadn’t completely realised how intertwined every aspect of her existence was with her mum. They’re clearly, visibly close, and Helfand doesn’t ever make that observation in such stark and plain terms, but it’s a key point. A mother’s influence over their child might be obvious, and something that everyone knows occurs; however facing it personally, and excavating what that’s meant for every choice you’ve ever made, the person you’ve turned out to be and the life you’re leading is no small feat.

Helfand’s self-reflection is born of her mother’s terminal illness, with the colon cancer she’s coped with for two and a half years progressing to a state that can no longer be treated. Dealing with that situation forces Helfand to once again confront her own brush with the disease a quarter-century ago, the inescapable impact it had and the imprint it left on her plans to have children. Accordingly, she’s looking both backwards and forwards, while trying to make the most of the present — the time she has left with Florence. And, exactly seven months later, when her latest quest to adopt a child bears a happy result, she’s unexpectedly in similar emotional terrain as she adjusts to becoming a mother at the age of 50 without her mother on-hand to help.

It’s never easy to share one’s story, airing your pain, heartbreak, sorrows and traumas in public. As Helfand explains, she began filming everything as a way of facing her own cervical cancer, the radical surgery required and the grief she felt afterwards, because “documenting what was happening to us was the only thing that made me feel better”. It’s never easy to unfurl your experiences in a manner that both captures it faithfully and draws broader insights, either, which Love & Stuff manages even when it proves intricately tied to Helfand’s perspective. Her life isn’t the same as everyone’s — or even anyone’s — but the feelings she trawls through and many of the situations she faces still resound with familiarity. That’s accurate whether Helfand is listing all the things she misses about her mother (“her voice; her looks; her skinless chicken; her long, pregnant pauses; and her uncanny intuition”), finally tackling her own health after ignoring it for years, or noticing the ways in which her response to change is mirrored by her daughter as she grows up.

With home videos simultaneously providing the film’s footage and assisting it to chart the passage of time as the years roll by, Love & Stuff always has an organic, cherished, lovingly made look and vibe, which — although it might not immediately seem the case — also helps it strike a wider chord. Indeed, the idea that you need to hone in on the minutiae and be as specific as possible in order to offer something meaningful, rather than something generic, is certainly at play. Every second of Helfand’s film doesn’t have that effect, but every second still contributes to an overall self-portrait — and a portrait of two mother-daughter relationships — that pack a punch. And even at its most literal, with Florence’s belongings strewn across rooms or stored in boxes piled high, the connection between love and stuff is always resonant and relatable.