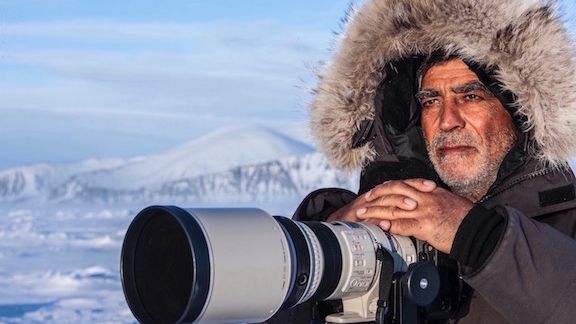 Moby Dick’s Captain Ahab had his white whale. And Picture of His Life’s Amos Nachoum has his white polar bear.

That’s the quest — one of them, anyway — that inspires wildlife photographer Amos Nachoum, the focus of Yonatan Nir and Dani Menkin’s compact, compelling biographical portrait.

Picture of His Life fully lives up to its title’s dual meanings.

Initially, the documentary tracks Nachoum’s attempts to photograph the elusive polar bear in the icy waters of the Canadian Arctic. Not just on the water, mind you, but in the water, swimming alongside the world’s largest land carnivore.

The documentary also dives deep into Nachoum’s background — and explores how, and why, the Israeli native became a celebrated scuba diver and photographer, specializing in face-to-face images of killer whales, sharks and other underwater creatures.

“He comes back with images no one can get,” comments Emmy-winning cinematographer Adam Ravetch, who joins Nachoum on his polar bear odyssey — and serves alongside Nir as one of the documentary’s directors of photography.

Before Picture of His Life charts that course, however, it shifts to Israel — first in the 1950s, through family pictures, when Nachoum clashed with his martinet father, a veteran of Israel’s 1948-49 war for independence.

Decades later, attending his father’s 90th birthday party in Tel Aviv, Nachoum sits silently as the patriarch (who wanted his son to be a carpenter) assesses his son’s chosen life.

“Everything he achieved was only for himself,” the father comments. “A man who doesn’t give to others is nothing.”

“We were just kids,” a fellow soldier recalls. “There is no way such an experience will not leave scars on your soul.”

Which helps explains why, afterward, Nachoum opted to “look at the beauty of life rather than the misery of life,” he says.

Picture of His Life touches on a range of significant issues, from climate change to changing ways of life for the Inuit guides who help Nachoum track potential polar-bear photo ops.

Most of all, however, there’s the stirring contrast between the stark, seemingly endless Arctic setting — cloud-studded skies, wind-stirred waves — and the grizzled, dogged “soldier of Mother Nature” dedicated to shooting photos instead of bullets.