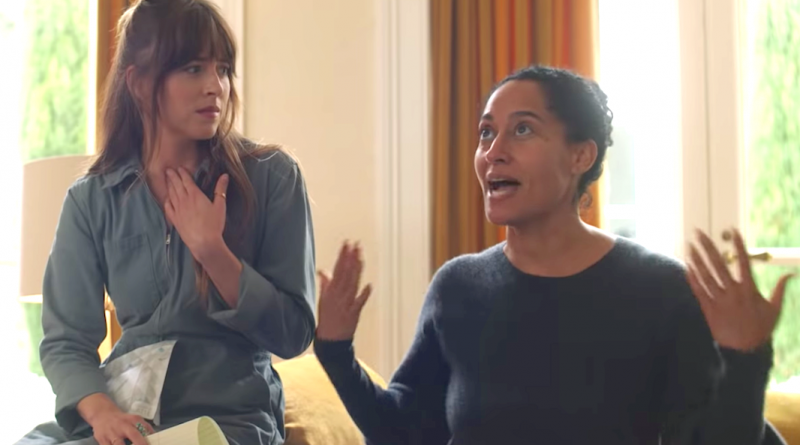 After seeing the trailer for the dozenth time, I admit I didn’t have high hopes for The High Note, which looked like generic rom-com-ish fluff.

But, thanks to solid performances by Tracee Ellis Ross, Dakota Johnson, Kelvin Harrison, Jr. and Ice Cube, the movie rises above its genre to become truly compelling.

Tracee Ellis Ross stars as Grace Davis, an iconic singer/songwriter who’s won 11 Grammy Awards and continues to sell out every performance. But Grace is now middle-aged and she’s been singing those same songs for years. Although her manager (Ice Cube) encourages her to settle down and accept a Las Vegas residency, Grace yearns to put out a new album.

Her assistant, Maggie (Johnson), is all for that idea. She’s been working for Grace for three years and just may be her biggest fan. She knows everything about her – and about the music business. The daughter of a singer and a radio personality, Maggie lives for music. She adores her job and is convinced she’s important to her boss – although Grace calls her Margaret and expects her to be on call 24/7.

“It’s my dream job – or the gateway to my real dream job,” Maggie tells her best friend and roommate, Katie (played brilliantly by Zoe Chao).

Maggie really wants to be a record producer, and she really wants to produce Grace’s next record. The problem – well, one of the many problems – is that, according to Grace, “Only five women over 40 have had a number one hit, and only one was black.”

She may not be willing to take the chance of ending her career on a flop but, of course, none of that bothers Maggie.

Tracee Ellis Ross has the command of a diva – she is the offspring of music royalty, after all – but it’s her quieter moments with Johnson that let her express her vulnerability and make us care about her character. They share some wonderful, intimate moments and, at one point, Davis bares her soul and Maggie admits, “We have very different problems.”

The High Note is given an extra jolt of authenticity by the fact that it provided Ross the opportunity to fulfill her own lifelong dream of becoming a recording artist and releasing her own single, a beautiful song from the movie appropriately titled, Love Myself.

Director Nisha Ganatra and screenwriter Flora Greeson have created an empowering film that celebrates women of all ages. They even make Maggie’s fun-loving roommate a surgeon, which will not go unnoticed by impressionable younger viewers. (The only misstep is Grace’s stereotypical bimbo house assistant, played to character by June Diane Raphael.)

Ross may be the leading lady here but, make no mistake, the movie belongs to Johnson. She is so likable here, bringing a real credibility to the role, that she is the one we root for. Her Maggie’s enthusiasm is infectious and her work ethic admirable. We learn from her failures and are buoyed by her success.

The movie has a few twists and turns – some predictable, one I didn’t see coming – that add layers to the story and give it a surprising richness.

During these dark times when we could all use something uplifting, The High Note is just that.