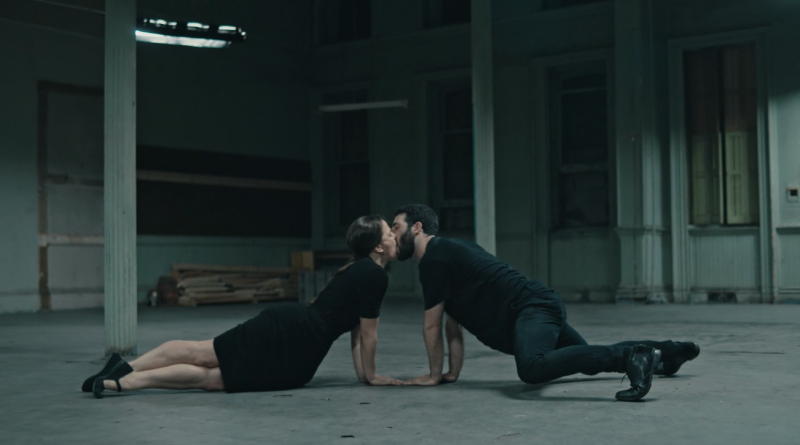 Writer-director Boaz Yakin’s boldly unconventional and often exhilarating exploration of modern love revolves around two dancers, Aviva and Eden, and their inevitably complicated relationships with each other. It begins as “an old-fashioned letter-writing romance” (though the letters are, of course, email) brokered by a mutual friend; Aviva is in Paris, Eden in New York. They quickly progress to phone calls, which are less satisfying—talking makes it clear that while they share interests and enthusiasms, their temperaments are very different. Aviva is impulsive and Eden insecure, but they’re alike in that they embody the old musical theater aphorism: If you can’t say it, sing it and if you can’t sing it, dance it—and dance they do, first on the streets of their own cities and then together, when Aviva relocates to New York.

Aviva is a welcome counterpoint to the sort of Hollywood dance film epitomized by diva-driven soap opera (The Turning Point, 1977), psychological horror (Black Swan, 2010) and YA-oriented romance (Center Stage, 2000); Aviva isn’t about making dance accessible by showing that dancers are just like us only leaner and fitter, or by tearing back the curtain to reveal that their formidable commitment and magical ability to hear the muses come with the curse of eating disorders and bloody feet. It’s more a response to a question posed by W.B. Yeats: “How can we know the dancer from the dance?”

Of course a dancer is a person and a dance a piece of choreography, whether spontaneous or carefully crafted and polished. But the dancer and the dance are inseparable; each brings the other to life. Dancing is a passion. Students who don’t feel the rush drop out because it’s physically and emotionally too hard to commit to unless you can’t imagine doing anything else even as you know—the evidence is all around—that dancing bodies only hold up for so long before they break beyond repair. Aviva is about living in dance, dance as a core identity (all of its dancers are dancers, not actors with dance doubles). But that said, doubling is a vital part of the film’s examination of identity and part of that identity is sexual, which Aviva explores intimately and through the prism of a gender fluidity that embraces the notion that strength and submission, sacrifice and selfishness aren’t inherently gendered or even necessarily opposites.

This concept is literalized through the bold conceit of having both Aviva and Eden played by two dancers, one male and one female: Aviva by Zina Zinchenko and Or Schraiber, Eden by Tyler Phillips and Bobbi Jene Smith. It produces fascinating scenes in which the iterations of Aviva and Eden speak to their opposite—or perhaps the term is “complimentary” sex others in various configurations… configurations that are also sexual.

Aviva is refreshingly frank about the extent to which sex—the fact, circumstances, convolutions and complication of—plays in thriving relationships, for better and for the kind of worse that ties people into life-strangling knots. Its frankness extends to matter-of-fact nudity and extended sexual encounters whose physical and emotional dynamics have a remarkably vivid intimacy.

Like its characters, Aviva is theatrical and driven by the belief that life is a work in progress, best lived vividly and embraced. Eden and Aviva come together and break apart, but their shared experiences—shape their lives as artists and as people, alone and together.