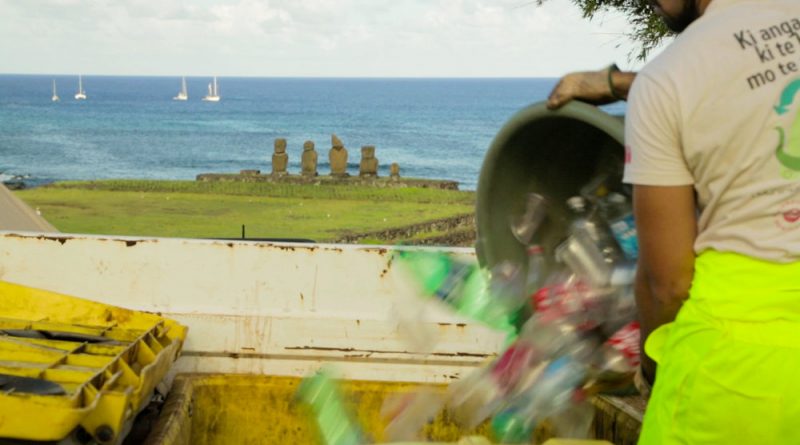 In many ways, the pandemic is the perfect time to watch Eating Up Easter – especially if you’re an avid traveler. Not only does this documentary about Rapa Nui (known to most of the world as Easter Island) cinematically transport you to the mysterious island and make you want to plan a trip to see the ancient statues for yourself but, more importantly, it makes you re-examine that desire and start to understand the devastating environmental impact of tourism.

The movie is a family affair, directed by Rapanui director, Sergio Mata’u Rapu, and written and co-produced by his wife, Elena, who’s an anthropologist. They frame it as a letter to their young son, with Rapu narrating the history of his ancestors’ homeland along with his own personal stories. It’s a little gimmicky but, at this particular time when our own administration is so self-centered, it’s a powerful reminder that our children’s futures depend on what we’re doing now.

Rapu and many others credit/blame Kevin Costner’s 1994 film, Rapa-Nui, for the onslaught of tourists, who brought materialism, modernization and tons of trash to the island along with jobs and a comparatively-thriving economy.

There is so much trash, in fact, that it is almost impossible to manage. Although there are only 5000 people actually living on the island, in just one week, there are an astonishing two tons of recycling to deal with.

Mama Puri, a central figure in the film and the community, has dedicated her time and energy to this endless chore and she’s angry. It doesn’t help that Rapa Nui is located near a prime spot for coastal trash. Floating international trash is a constant problem. When only five of the 36 clans are represented at the island clean-up, Mama Puri threatens to “turn them all into chop suey.”

She’s not the only one worried about what’s going on, and we meet a couple trying to make the island 100% sustainable. Because music plays such a vital role in the local culture, they’ve built a music school, with walls made of 15,000 tires and 40,000 glass and plastic bottles, and boasting solar panels and a system for rainwater collection. But they don’t know how they will be able to keep it all running financially unless they open it to tourists.

Eating Up Easter is an important film for these times and a real wake-up call. It asks us to remember that we’re all interdependent and to think about whether disrupting a local culture to take a selfie is really worth it.

“We are the living statues,” says Mama Piru, pointing to the iconic Moai.

Long may they stand.