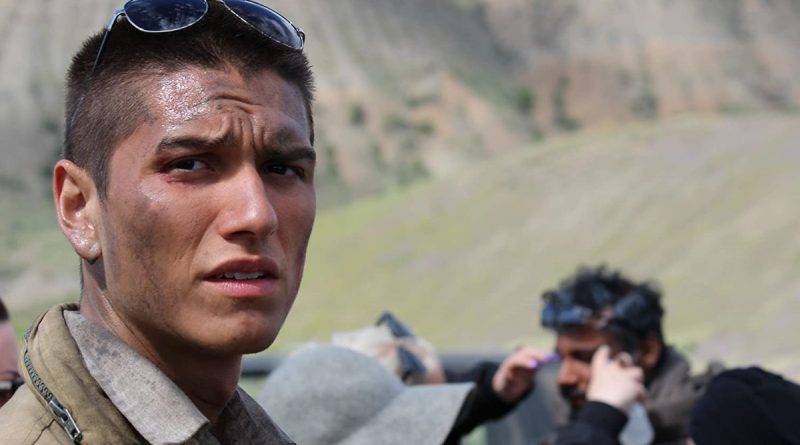 A carefully woven patchwork of genre, emotion and politics, Métis filmmaker Marie Clements’ Red Snow brings an extraordinary new twist on that seemingly most hackneyed of film categories: the war movie. The very title of the film itself – a running in-joke about the false yet widely held cliche that the Inuit have 10,000 different words for snow – flags from within how almost fetishized ‘distinctions’ as a broader concept can be. This manifests in the movie in two key ways; firstly in terms of how it both leans into but also simultaneously resists the cookie cutter demands required to adhere to the familiar codes and conventions of the war film. Secondly, and perhaps much more impressively, it also complicates the entire category of identity, be it personal, cultural, political or racial.

Structurally, in Red Snow Clements weaves back and forth between two different time periods in the life of her central character Dylan, played with a low-key, authentic intuition by the extraordinary Asivak Koostachin. Dylan is a Canadian soldier serving in Afghanistan, a young Gwichʼin man who has left his Arctic home and family for a very different world. Flipping back and forth between his involvement in a taboo romance in the past and contrasting it with his capture by the Taliban and subsequent escape in his present, the contrast of the two climates that mark the primary locations of Red Snow – the snowy plains and the sweltering desert – blur increasingly as the central cast of characters from these two seemingly striking different cultures discover common ground and a shared humanity.

With her background as a playwright and performer as well as a filmmaker, Clements avoids the trap that far too many talented wordsmiths fall into when they make feature films; she not just resists overly relying on dialogue, but almost playfully and always perceptively uses it to compliment what frequently feels like the almost embodied manner in which her story plays out. This is in large part through Koostachin’s performance as Dylan, which unambiguously carries the film; you simply cannot imagine working even half as well with anyone but him in the lead role.

Generically, Red Snow keeps its surface themes of humanizing individuals in the face of dehumanized mass conflict familiar enough to not alienate viewers – we settle in for a war movie, and it ticks all the boxes to satisfy those expectations. But Red Snow is more than your usual war film; its cat-and-mouse pursuits are structurally functional, but Clements excels in bringing to life the nuances of interpersonal relationships and their bigger meanings. By reducing that almost-always privileged figure of the white man to a barely glimpsed footnote in the story of its array of central Gwichʼin and Afghan characters, Red Snow is a reminder that there are always new, important ways to approach genres where we might assume we’ve seen it all before.