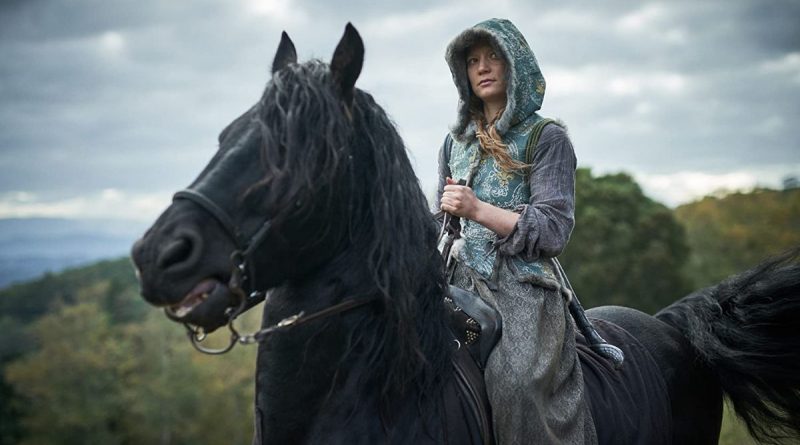 Moody and revisionist, Mirrah Foulkes’ dark dramedy Judy & Punch speculates about the story behind the classic British puppet show. In the process, it ably explores the important and ageless themes of artistic talent, revenge, superstition, allyship, and domestic violence, all wrapped up in lush cinematography and lavish production design. 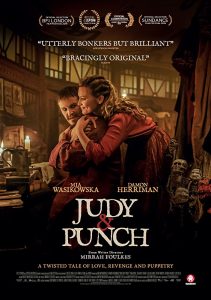 Mia Wasikowska gives a memorable performance as Judy, one half of the town of Seaside’s most successful puppeteering duo. Her husband, Punch (Damon Herriman), is arrogant and selfish, but he grudgingly acknowledges Judy’s talent, and he does seem to care for her, in a way (a way that includes infidelity and drinking too much). But he clearly doesn’t respect her. And when his irresponsible, self-centered, abusive ways lead to a jaw-dropping tragedy, he takes his guilt out on her, viciously and unforgivably.

Judy’s wrath fuels her transformation into a Valkyrie-like vessel of revenge. Along the way, she joins forces with other outcasts who’ve been shunted aside due to Seaside’s deep-rooted superstitions and prejudices, forging an alliance that promises to turn the town on its ear. Punch, meanwhile, scrambles to deflect blame onto anyone but himself — not realizing that his time is almost up.

The casual violence of the puppet show that inspired the film has led many to question its status as a beloved children’s entertainment — but as the springboard for a film dissecting both abuse and gender roles, it’s ideal. With its twisted-fairy-tale feel and moments of dark humor, Foulkes’ film is both thought-provoking and satisfyingly entertaining. — Betsy Bozdech

Nell Minow: Like the recent Ophelia, Judy & Punch is a remix of a classic story about a female character who is a near-powerless victim, existing only to give the male character someone to abuse. Mirrah Foulkes creates a marvelously immersive world that is almost but not quite a fairy tale, deliciously sly, giving Judy the agency and power female audiences have waited centuries to see.

Susan Wloszczyna: Judy & Punch is a none-too-subtle #MeToo fairy tale that is part Brothers Grimm and part Shakespeare with a pinch of Monty Python tomfoolery. Consider the fact that it is set in a 17th-century village named Seaside that is nowhere near the sea. Read full review.

Leslie Combemale A fresh and decidedly feminist take on the classic 16th century puppet show Punch and Judy, Judy & Punch is alternately gorgeous and lyrical, and excruciating to watch. First-time feature director and screenwriter Mirrah Foulkes is coming in hot, with fearless, bracing scenes that will long be etched into viewers’ memories, crafting a very Grimm tale of the ‘woman behind the man’. Judy is ever-challenged and made low by Punch’s emotional and physical abuse, and his ability to rob her talents and put himself in the spotlight. She is part of a world both old and new, where women toil largely in silence, are vilified when they excel in a craft or skill that eclipse the abilities of the men around them, and are bullied into creating, while the men take credit for those creations. Read full review.

Liz Whittemore The puppet artistry and sly visuals displayed in this film are both elegant and profound. They beautifully illustrate the plot at any given moment. Period sets and costumes are lovely to behold. The cinematography is lush and the score will shudder your soul. The plot is fraught with anxiety. Judy and Punch shines in its all-consuming darkness. Read full review.

Jennifer Merin Filmmaker Mirrah Foulkes’ Judy & Punch is a fabulous feminist twist on the Punch & Judy puppetry meme. Mia Wasikowska stars as the persevering Judy who, along with her egotistical and abusive husband Punch (Damon Herriman), runs a puppet theater in the town of Seaside, a rural hamlet ruled as much by superstition as by corrupt authorities. Punch’s puppetry has the community enthralled, but ambitions, secrets and hidden relationships — and the threat of a rebellious band of nonconformists — threaten the status quo in this tantalizingly colorful tale set in a mysteriously indeterminate era. In scale, scope and impact, Judy & Punch is epic.

Pam Grady: “Behind every great man is a great woman,” the cliché goes. Judy & Punch begs to differ finding behind a great woman the hindrance of a very bad man. In the land-locked town of Seaside, Judy (Mia Wasikowska) and husband Punch (Damon Herriman) entertain the village with their marionette show. Punch takes all the credit for the couple’s success and nurses dreams of stardom, but he is a vain, brutal drunk and talentless hack, while Judy is a brilliant puppeteer and magician – a dangerous profession in a superstitious burg given to stoning “witches.” Actor turned writer/director Mirrah Foulkes makes a lively feature debut with this 17th-century-set revenge tale shot through with pitch-black humor and delightful anachronisms. The melodrama plays out like a live-action Punch and Judy show, but one with a twist as Judy rises up to put Punch in his proper, miserable place. Indie queen Wasikowska (Only Lovers Left Alive, Damsel) delivers a haunting performance as a woman determined to right a wrong and reclaim her life. Herriman lends her sterling support as Judy’s petulant, inebriated, cowardly mate – less a husband than a deadweight she comes to realize she needs to lose.

Marina Antunes Mia Wasikowska gives another fantastic performance as Judy, an oft abused wife who shares the stage with her husband Punch, Damon Herriman in another great role, as the two deliver raucous marionette shows. The pair work exceptionally well together but when he drinks, Punch is impossible to deal with. On a particularly bad day, the drinking turns violent and what starts as story of a husband and wife at odds takes a violent turn. Mirrah Foulkes’ feature film debut Judy & Punch is a dark, dirty, and decidedly feminist story of revenge.

Sandie Angulo Chen: Mirrah Foulkes’ dark comedy Judy & Punch offers a feminist twist on the legendary 16th century marionette show of an outrageous man and his put-upon wife and their baby. In this version, two beloved puppeteers are also Judy (Mia Wasikowska) and Punch (Damon Herriman), and their life in Seaside loosely mirrors the structure of the puppet shows – until a sequence of slapstick tragicomedy ends in horrible violence that changes their lives. Both leads are excellent, and Wasikowska, no longer a girlish ingenue but a 30-year-old playing a mother, is outstanding. Herriman is eerily good as a comedic and egotistical puppeteer whose inner demons transform him into a man capable of unspeakable domestic violence. This is a stylized, occasionally twisted dramedy that’s better experienced than explained. In a bit of revisionary retelling, it’s Judy, not Punch, who prevails.

Cate Marquis Set in the Medieval-esque town of Seaside, which is nowhere near the sea, ambitious puppeteers Punch (Damon Herriman) and his supportive wife Judy (Mia Wasikowska) are hoping their popular puppet show will catch the eye of out of town talent scouts and make them successful. Punch is very popular and, while he acknowledges his wife’s talent, he’s clearly the show’s star and its big ego. Judy tolerates a lot until Punch goes too far, in director Mirrah Foulkes’ clever table-turning, darkly comic fantasy, that takes on both patriarchy and intolerance.