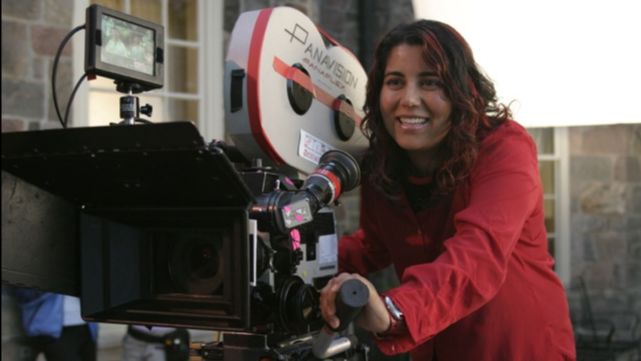 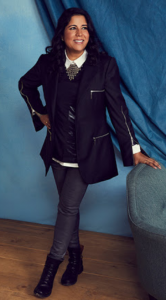 As writer, director, and producer, Nisha Ganatra has been committed to gender-balanced, diverse casts and crews since before she even made her first feature film. As she herself says, “The whole reason I became a filmmaker is to represented people and stories that I wasn’t seeing in film.” As both queer and a woman of color, she could have pulled the ladder up behind her as she climbed the ranks of Hollywood. Instead, she has built a successful career anchored in inclusion, putting a full spectrum of voices and talents on display in her work. From her award-winning 1996 short Junky Punky Girlz, to her first full-length feature, 1999 Outfest and film fest darling Chutney Popcorn, to her most recent films Late Night and The High Note, Ganatra walks the walk in a way only a select few women working in the industry dare to do, and as such, she is helping change the future for women in film.

Ganatra was born June 25th in 1974 in Vancouver, after her parents had immigrated from India. Her family moved a lot when she was a child, so she went different schools on nearly a yearly basis. Ganatra remembers going to a movie theater with her mom, which she did often, and seeing Mira Nair’s Mississippi Masala in 1991, and Gurinder Chadha’s Baji on the Beach in 1993. Before that, she had no idea women who looked like her were working in front of or behind the camera. Seeing their films opened up a world of possibilities she had never considered. On her own, she also saw Pratibha Parma’s 1991 documentary Khush, a British short film that portrays lesbian and gay men from India and other parts of Asia. 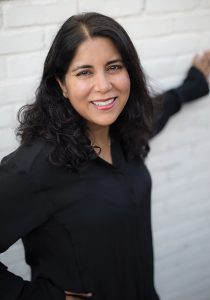 Still, “like a good Indian daughter”, she went to college to study law or medicine in California. As a UCLA undergrad, Ganatra would sneak into film classes. Inspired by what she experienced there, she bought a camera and shot a short film. She had found her calling. “I was working on sets, and kept trying to figure out where the directors were coming from. It seemed like you could work your way up to any position, except the director role. That director was always flown in from some secret location. I figured out that was NYU Film School.”

She applied to NYU, and got in, but only had enough money for a brief stay. As a last effort to create from her own voice, she created the short Junky Punky Girlz, and spoke from her own experience of feeling trapped between two worlds, one steeped in traditional Indian culture, the other that embraced her own queerness and love of urban, pop culture-connected America. It featured a queer Indian-American girl and her two best friends, her struggle with the decision about getting her nose pierced, and what is says about her own heritage and her as an individual. It won her a scholarship that allowed her to stay at NYU and learn her craft. 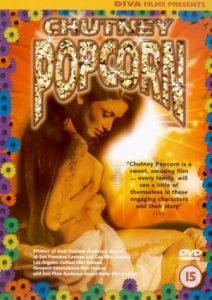 At NYU, Spike Lee was her directing professor, and she attended lectures with Martin Scorsese and Barbara Kopple. Lee told her to make a feature film that was honest and true to her own perspective, so she made Chutney Popcorn, which she directed, wrote, and played the lead. That film was about a young, gay Indian-American woman who commits to being the surrogate mother for her sister’s baby. It was not only accepted to a number of film festivals, but won numerous audience awards around the globe. That taught her an early lesson that, for artists, creating with their authentic selves often leads to the best work. She also noticed how few women were working in positions of power in film. “With Chutney Popcorn, I noticed there were lots of women working but no one would put them in as head of the departments.” She realized it required a commitment from the top down. While she already had strong, complex women represented in front of the camera, she hired women as department heads to create gender balance below the line as well. 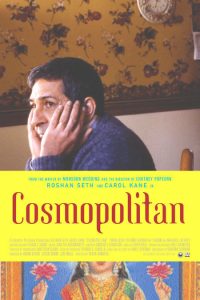 Shortly after that film’s release, Ganatra helmed a sophomore feature, Cosmopolitan, starring Carol Kane, which premiered at SXSW, and four episodes of the reality show The Real World in 2001, but TV directing gigs were elusive. She worked on various films, including 2005’s Cake and 2013’s Pete’s Christmas, which she also wrote and executive produced. It wasn’t until Jill Soloway hired her to direct three episodes of Transparent in 2014 that she truly landed on Hollywood’s radar. She won a PGA Award and was nominated for a Primetime Emmy for her work on the show. This opened up various options for her in TV, and she has since worked on high-profile shows like Mr. Robot, The Mindy Project, Shameless, Better Things, Girls, Dear White People, Fresh Off the Boat, and Brooklyn Nine-Nine. All these projects led to her being offered Late Night, written by Mindy Kaling, which premiered at Sundance in 2019, garnered rave reviews, and was picked up my Amazon Studios in a record-breaking deal.


Through it all, Ganatra has steadfastly represented women in all aspects of filmmaking. Her position as a board member for Women in Film: LA, as well as the fact that Late Night garnered the now-coveted ReFrame Stamp, which is given only to productions with a balanced inclusive cast and crew, indicates her commitment that folks from all walks of life should be able to see themselves onscreen and also be represented below the line. Leading the charge to make sure there is inclusivity and balance, Ganatra has this to say: “Your crew having a gender balance is not only the right thing to do because it reflects our workforce more accurately, but it will effect the finished product in a positive way, because it does matter who is behind the scenes. It matters just as much behind the scenes as in front of the camera.”

TOP OF THE A-LIST 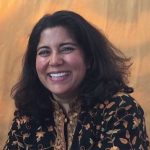 Subsequent to the release of the Golden Globe-nominated Late Night, Ganatra signed an overall two-year deal with ABC Studios to write, direct, and develop projects across all platforms, through her newly launched Ladies’ Car Productions. She described her new company as a “safe space for women, people of color, and the LGBTQ+ community just as the ladies’ car is on trains around the world”. True to her philosophy, Ganatra hired a woman of color, Nikitha Menon, as director of development.

“Now that I do studio films…I find I’m put in a more educational role where I say of course [women] have the experience of the other people out there, [but] they haven’t been given the opportunities. We can’t compare resumes like apples to apples. We have to ask, What could this woman do if she was given the chance. It takes extra effort and you have to push people really hard. There’s a lot of money at stake, people are worried, and I’m putting myself on the line for these people and I hope they rise to the occasion,” Ganatra told Lilly Singh at the 2019 Film Independent Forum, referring to her leadership role in the ongoing struggle for parity. 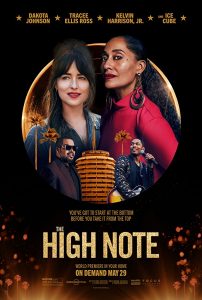 With her new film, The High Note, which releases online at the end of May, Ganatra again presents a story that, like Late Night, positions an older, experienced woman who works in a male-dominated industry — in this case, it’s the music industry — alongside a young woman who hopes to break into that world.

When asked how stories about older women of power and younger women of potential sharing their struggle resonates with her as a filmmaker, Ganatra explains, “We all have to constantly be our own best cheerleader, as well as remind ourselves to stay grounded, and not get complacent when we are finally let in. In The High Note, and all my films, it’s always a message I want to get behind: if women are encouraged to take big risks, they should be rewarded, instead of paying for having taken them. In both Late Night and The High Note, the subjects of ageism and sexism are tackled, which are perpetual problems.”

“The thing that is important to me is to show women turning towards each other, and being the greatest allies towards each other, helping each other achieve their dreams so that we rise together,” she continues. “Always, when we help each other, we help ourselves. That’s the more current twist to the story, I watched Working Girl as a reference for both movies, and instead of the Sigourney Weaver vs. Melanie Griffith dynamic, we could have Grace Davis and Maggie help each other achieve their dreams, and Katherine Newberry and Molly Patel turn to each other for support. I think that’s something that I really love. I feel like I’ve really been guided, and helped, and supported by women in our industry, and of course a lot of male allies that had something really special that I wanted to pay tribute to.” 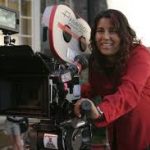 If Ganatra has one bit of advice for aspiring filmmakers, it’s this: “The biggest thing is to not wait for someone to give you permission, because no one will. I had this amazing professor who said she thinks the biggest myth out there in our industry is what she calls the Hollywood hammock, that one day you make it and you get to chill. It doesn’t exist. I met these amazing women who have been working for years. I had a meeting with them. They’re still hustling just like day one. They don’t think they’ve made it, and they have books written about them. It’s always a hustle, it’s always hard work.” 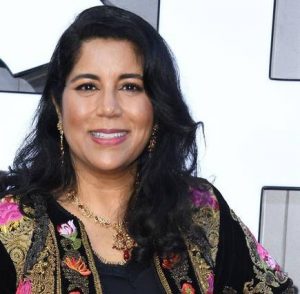 Nisha Ganatra embraces her unique filmmaker’s perspective. As her influence soars, she brings women aboard to work on all aspects of her projects. She’s a working parent and seeks viable ways to balance career obligations and childcare for all who work on her team. Presenting joyfully humorous stories about strong, complex female characters whose authenticity resonates with audiences, Ganatra addresses issues of the moment. In Late Night, fading talk show diva Katherine Newbury (Emma Thompson) is told, “Be careful showing who you are. Once you turn that switch on, you can never turn if off again.” AWFJ salutes Nisha Ganatra for being completely comfortable in showing us all who she is, as well she should be. — Leslie Combemale