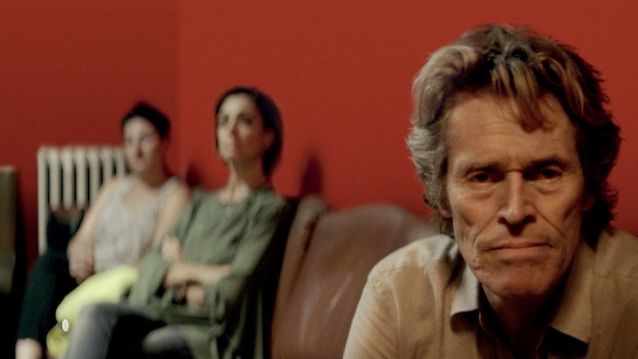 The controversial nature of Abel Ferrara’s career is given life in Tommaso, a sort of confessional from the filmmaker that uses fantasies of all kinds—sexual, violent, heroic—to communicate a fevered mind. Starring a fully committed Willem Dafoe as Tommaso, a version of Ferrara, and with a cast populated by people from Ferrara’s own life, the film hurtles forward with increasing surrealness to a conclusion heavy with self-flagellating imagery. But the film ultimately lacks a balance between portraying Tommaso a man rebuilding his life and as a man plagued by the recurring mistakes of his younger years. The result is characters as cyphers, subjects toward which the stand-in for Ferrara directs his rage or lust or resentment, and Tommaso ultimately becomes trapped within a cycle of repetitive flatness.

Dafoe (a constant collaborator of Ferrara, who previously appeared in films such as 4:44 Last Day on Earth, Pasolini, and Siberia) stars as Tommaso, an American filmmaker now living in Rome. His daily schedule is almost idyllic: He’s taking private lessons to improve his Italian; he strolls through a run-down, but lively, piazza that serves as the courtyard for his apartment building; he buys only the fresh produce and groceries he needs each day; the waitress at the local café recognizes him and knows his coffee order. He remembers his Italian tutor’s birthday, and surprises her with a cake and a candle. He’s working on a new film, and although securing the funding hasn’t been easy so far, “I’m confident we’re gonna find it,” he says. He seems to be a man taking life a day at a time, and savoring it.

At home, though, there’s friction. Tommaso’s wife Nikki (Cristina Chiriac, Ferrara’s actual wife) is decades younger than he is, and her Italian is better than his, and she is teaching their daughter, Deedee (Anna Ferrara, Ferrara’s actual daughter with Chiriac), her native language of Moldovan, which Tommaso doesn’t speak. There is a level of distance here because of that age gap and because of the language differences, but at first, their domesticity seems mostly idyllic. Ferrara’s roving camera trails the trio as they eat together and dance together. After Deedee goes to bed, Tommaso asks for Nikki’s thoughts on his script, then initiates sex. But that feverish act of lovemaking, which Tommaso tries to use to patch over the argument he and Nikki are beginning to have about shared frustration in their marriage, is interrupted by Deedee’s crying.

Tommaso is left half-naked, hair tousled and unsatisfied, and that moment sets off a series of events in the film that blur the line between reality and fantasy. He begins to suspect that his wife isn’t being faithful—but is that his resentment and his imagination, working together? There’s a scene where he is arrested and taken to a police station for questioning—have we stepped inside a dream? And more than once, Tommaso meets young, fully nude women for sexual encounters—the waitress from the café, one of the students from his acting class. Are these fantasies? Ferrara commentating on the controversies of his past, with these women serving as representations of the seductive power of his past bad behavior? The film refuses clarity, so there is a constant push-pull between what we’re seeing Tommaso do and what we see happening around him. In one scene, Tommaso does yoga and practices calming breathing practices in the foreground, while Nikki embraces her mother as a guest to their home in the background—and then, out of nowhere, another man appears, intimate and affectionate with Tommaso’s wife.

Tommaso’s suspicions are a spreading infection, and admittedly, Dafoe’s wild-eyed performance communicates them well to us. Most impressive, though, is how present Dafoe is in scenes at Tommaso’s Al-Anon meetings, where he recounts stories from his past, going through a full gamut of emotion—fondness, regret—as he looks back on his years before becoming sober. But the emotive power the movie obtains from those moments, when Tommaso is a man considering the mistakes that have shaped him and the guilt that he carries from them, is undone when yet another naked woman appears onscreen for Tommaso to fondle. “What should I know? You forget I’m a man,” Tommaso had said in response to Nikki’s complaints about his lack of communication, but the film doesn’t dive deeper into that statement. Its presentation of male jealousy feels superficial, and its offering of martyrdom to atone for past sins too familiar.

“There’s something wrong about it. But I don’t know,” Tommaso admits to Nikki about the conclusion of his script, which emphasizes a couple’s sexual bliss; during one of his acting classes, Tommaso describes his style as, “Performing for me is always between control and abandon.” Those two admissions give shape to Tommaso, and Dafoe is often captivating as the progressively unhinged protagonist, but Ferrara’s methods don’t do justice to his mission.