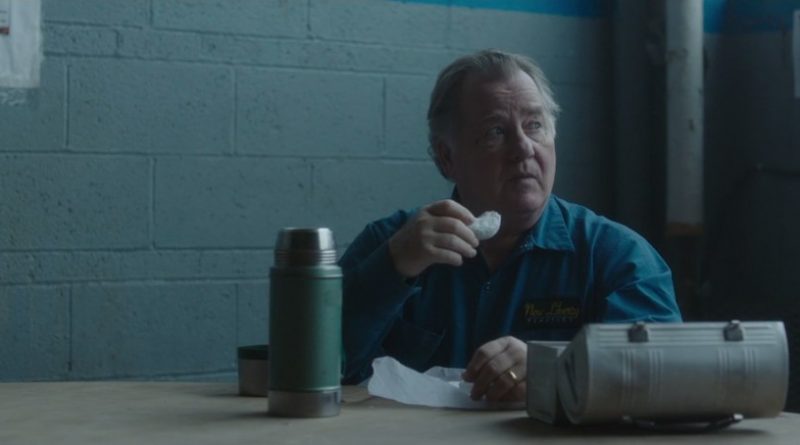 There’s nothing flashy about Working Man. No chases. No crashes. No sex or violence. It succeeds on subtlety. The protagonist has no flash either: Allery Parkes is just, as the title says, a Working Man. He has his bench and his locker, his lunch in the same corner, his steadiness.

And then he doesn’t. That is, the Rust Belt factory where he’s worked for years shuts down. The machines go silent, the lunch boxes snap shut, and the workers march out, their last pay checks pleated angrily in their calloused hands.

The next day, Parkes gets up at the usual time, kisses his wife on the cheek, and goes to work. He has to wrench open the gate to get in, but once inside, he cleans and oils his machine. And then he cleans the others on the factory floor. He stays busy titivating.

One day, another worker finds Parkes in the plant. And that’s when things start to change, when the little man hardly anyone noticed becomes an influencer.

But that’s not all there is to the plot, written by director Robert Jury. There’re death and grieving. They’re disillusionment and derailment. They’re awakenings and betrayals. But all very subtle.

Most of the film lies on Peter Gerety’s back. As Parkes, Gerety, who also appeared in Paul Blart: Mall Cop and Charlie Wilson’s War, moves deliberately, at an odd gait, depending on nuance rather than shine. Billy Brown from Sons of Anarchy plays Parkes’ complicated colleague, and Talia Shire from Rocky plays Parkes’ wife, who opens up as the film progresses. The cast of co-workers is diverse, to say the least.

Jury’s direction of his multi-layered script remains steady, well paced, a little surprising. David Gonzalez’s music adds measurably to the movie, a riff here and a telegraph there, in support of the small range of motion in the plot from woeful to whimsical. Working Man is not neon. It is a 60-watt bulb but it provides just enough light to see.

Working Man is available on demand.