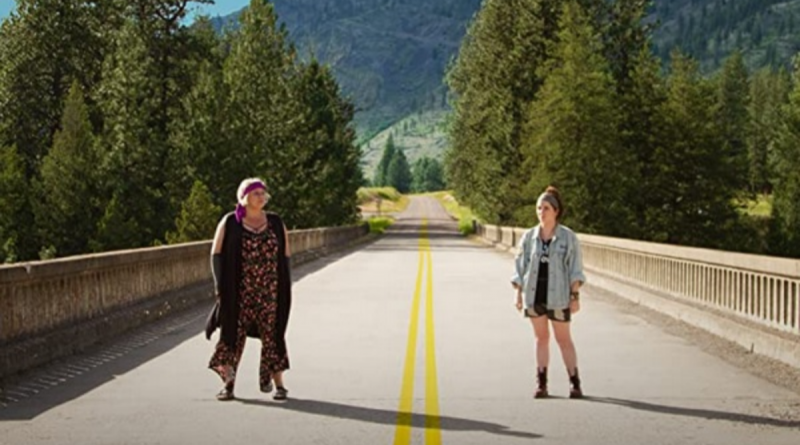 Whether watching romances bloom and wither, chronicling an eager protagonist’s journey, or exploring the long-simmering feelings that can haunt friends and families, emotional pain is cinema’s bread and butter. It’s filmmaking’s key source of drama and, in terms of on-screen depiction, it significantly eclipses its tangible counterpart. Indeed, physical pain is typically used to make a point about a character and their struggle. Or, in genres where bloodshed and violence undoubtedly causes consequences, it’s skimmed over or ignored completely in the name of action and scares. In The In-Between, however, there’s no denying the physical pain that its road-tripping friends experience regularly. Crucially, though, that’s not the movie’s primary focus.

Directed by and starring Mindy Bledsoe, who co-wrote the script with her co-star Jennifer Stone and their cinematographer Rob Senka, The In-Between ventures across America’s west with Junior (Bledsoe, making her feature debut as an actor as well as a filmmaker) and Mads (Stone, Deadtime Stories, Wizards of Waverly Place). They’re driving from Los Angeles to Portland via Las Vegas, Salt Lake City and South Dakota with multiple purposes — including seeing the sights, having both wild and quiet nights, and enjoying each other’s company. For Junior, the trip also honours her sister, whose music they listen to along he way. And for Mads, she’s returning home for the first time in four years, although that’s far from a straightforward part of their itinerary.

Thanks to an accident on an earlier road trip that casts a considerable shadow over this one, Junior also has complex regional pain syndrome, type two, in her arms, while Mads’ life changed forever when she was diagnosed with diabetes during her childhood. These respective health conditions are inescapable parts of each character, as well as intricately linked to their individual reasons for heading off on this getaway — and, it’s to The In-Between’s immense credit that their illnesses aren’t used to wring tears, nor simply mentioned once then overlooked. The film’s central duo is always just that, too; they aren’t unwell wives, girlfriends, siblings or pals pushed to the peripheries and occasionally deployed to make someone else’s life seem more difficult and tragic. That said, in their perceptive, Bledsoe and Stone are well aware that living with health conditions, including those that require monitoring and treatment on a daily basis, is just a fact of life for many.

Consequently, The In-Between is cognizant of Junior and Mads’ ailments, but neither woman is defined by them. Instead, their illnesses are one of many elements to both characters. Their conditions are influential and ever-present, of course; however so are their personalities, their hopes and dreams, their past struggles, their plans for the future, their friendship with each other, their connections to their families and the experiences they enjoy as they travel across the US. It shouldn’t be so refreshing and notable for a film to show living with physical disorders as normal, but it sadly is — and that’s noticeable here. Also pivotal: Bledsoe and Stone’s performances, which are naturalistic and authentic, especially at the points in the narrative when Junior and Mads’ health is foregrounded.

The pair shares a genuine rapport, too, as well as a knack for the rhythms of close relationships when tested in heightened circumstances. (A road trip always falls into the category, which is why the scenario has become such frequent film fodder.) As a director, Bledsoe’s fondness for organic beats and moments — and the comparable treatment of her protagonists — also extends to the movie’s visuals. Favouring natural light, Senka’s cinematography doesn’t avoid obvious scenic shots, but this won’t be mistaken for a glossy travelogue. Less convincing is the use of the soundtrack to stress emotion, with lengthy montages set to mood-appropriate tunes proving the type of crutch this modest but otherwise affecting and insightful feature avoids.