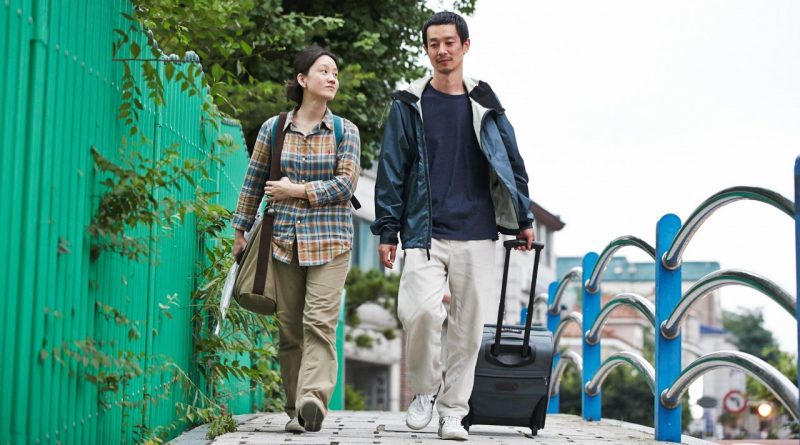 In Hill of Freedom, South Korean writer/director Hong Sangsoo uses an imaginative idea to present the on-again, off-again relationship between Japanese teacher Mori and Kwon, an instructor at the Korean language institute. After a two year absence, Mori has returned to Seoul, searching for Kwon in their old haunts, determined to gain Kwon’s acceptance of his marriage proposal, previously rejected.

The clever setup has Kwon, recently back in Seoul after a recuperative trip to the countryside, retrieving an envelope of letters written by Mori. As she leaves her office, nearly collapsing on the stairs, Kwon drops the stack of undated letters. She collects them, now minus any chronology. Nevertheless, as the anchor to whom the film returns, Kwon will read Mori’s letters in this random order which determines the fragmented sequence for the following scenes of Mori’s romantic appeal and quest. This suggests the way we may sometimes remember relationships, dipping in and out of cherished, small moments.

Not all exchanges foreground Kwon. In conversations with Seoul residents, Mori debates stereotypes of Japanese and Korean personalities, philosophical ideas about love, and human connections with his guesthouse landlady, her nephew, and the café’s owner. The title itself, Hill of Freedom, refers to a cafe with a Japanese name Kwon liked. A major location, that café is run by Young-sun with whom Mori becomes romantically involved. As the film’s setting, even though located in Seoul’s center, the historic Bukchon neighborhood (traditionally the residential area for government administrators and upper-class citizens) adds a bucolic feel, a complement to Mori’s contemplative, receptive state.

Stylistically, Hong prefers to keep his camera stationary, shooting in medium long shot to capture uninterrupted dialogue, primarily in English because Mori, the outsider, doesn’t speak Korean. Hong thereby directs attention to his characters’ interaction. Occasionally, Hong zooms in, a distracting characteristic of his style. With just over an hour running time, Mori’s sweet temperament and yearning make this film a charming, lovely experience. Primarily in English and some Korean with English subtitles, Hill of Freedom streams beginning June 12 with a link on the Grasshopper Films website.