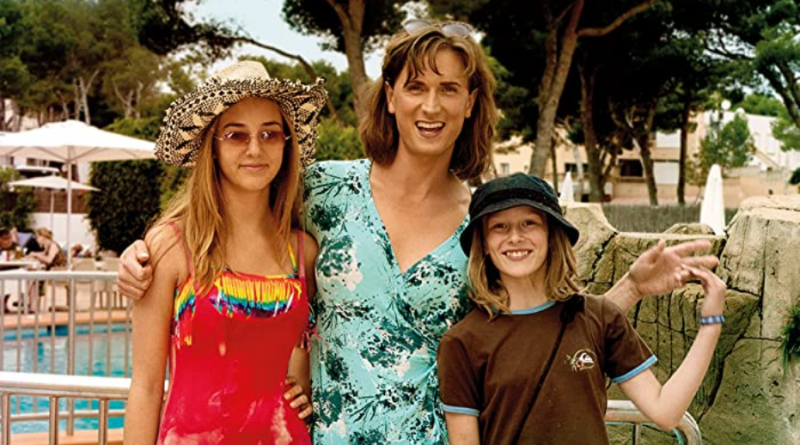 In My Perfectly Normal Family’s most telling and influential scene, the camera lurks in the corner of a nondescript room during a tense therapy session. In the centre of the frame sits 11-year-old Emma (Kaya Toft Loholt), with the back of her head monopoliZing the camera’s attention. It’s completely wrapped in a thick, chunky scarf, a fact that’s impossible not to notice. Beside her, however, Emma’s older sister Caroline (Rigmor Ranthe) can also be spotted, as well as the pair’s visibly angry mother Helle (Neel Rønholt). Only spied in fragments is the girls’ father Thomas (Mikkel Boe Følsgaard), courtesy of flashes of a pink, glittery cardigan and snakeskin pants peeking through behind Emma. She can’t see her dad thanks to her makeshift woolen blindfold. In fact, she’s choosing not to see. Accordingly, Danish writer/director Malou Reymann puts the audience in her upset protagonist’s shoes as firmly and empathetically as possible.

It’s a savvy choice for a moment that delivers a crucial piece of information: that Thomas will now be known as Agnete. Both viewers and Agnete’s family have already discovered that Thomas is transitioning to become a woman; however this is the first time they’ve seen Agnete’s new wardrobe, or even a glimpse of Agnete herself. A soccer-mad pre-teen who hates the colour pink and picked up her love of sport from her dad — as tender, suitably low-fi home video flashbacks show — Emma has been struggling to cope with Agnete’s transformation, and with what seems, to her, to be a sudden and unexpected change in the parent she’s clearly closest to. The entire film tracks this emotional journey, but sitting in that room with Emma and her family, it couldn’t convey the confusion plaguing Agnete’s youngest daughter in a stronger or more effective manner.

A delicate, affectionate, compassionate and understanding feature, My Perfectly Normal Family continues in the same fashion — not visually, obviously, but in its dedication to foregrounding Emma’s efforts to process her complicated feelings about Agnete. Narrative-wise, that involves jumping between various junctures, including Agnete’s initial revelation, the aforementioned therapy session, Emma and Caroline’s first visit to Agnete’s new home and a family holiday to Mallorca, as well as Caroline’s confirmation, a soccer club party with consequences, and the announcement of another piece of significant news. Punctuated throughout are further videos from Emma and Caroline’s younger years, illustrating the vision of seeming domestic bliss that Emma is so eager to hold on to. Doubling as a coming-of-age story, the film presents the life that Emma thought she knew in tandem with the sizable new shift in her status quo.

Although focused on a character closer to the more-receptive Caroline’s age than Emma’s, 2013 Australian film 52 Tuesdays charted similar territory — but My Perfectly Normal Family is its own movie. That’s a result of three important elements that shape this sensitive drama in pivotal ways. Firstly, Reymann demonstrates a potent desire to explore all facets of a child’s reaction to the transitioning of a parent. She examines the process keenly and, while always accepting, doesn’t skim over complex areas and altercations. When Helle suggests a farewell ceremony to say goodbye to Thomas, for example, the movie shows a parent trying to find an outlet for Emma’s sense of loss, while also rightfully communicating Caroline’s anger about her mother’s suggestion to essentially kill her father off. When Agnete is seen wholeheartedly embracing stereotypical female traits — the penchant for pink, a love of manicures and a professed lack of knowledge about soccer despite Thomas’ previous enjoyment of the sport — the film also interrogates both Agnete’s vision of femininity and the message this sends to lifelong tomboy Emma.

Secondly, Reymann speaks from experience. An intimate movie from the outset (and one that’s shot as such by cinematographer Sverre Sørdal), My Perfectly Normal Family stems from the first-time feature filmmaker’s own upbringing with her transgender father. The film tells a fictional tale, but it’s so specific in its rendering of Emma’s emotions — and, to a lesser degree, Caroline’s — that it could only spring from someone who has been there herself. That’s apparent in the narrative moments that Reymann and her co-scribes Maren Louise Käehne (Queen of Hearts) and Rune Schjøtt (Danish TV’s The Rain) choose to explore, as well as in the feature’s evident willingness to often let silence on the struggling Emma’s part say more than words could. Reymann clearly knows how Emma is feeling, and how being able to verbalise that — or, at times, verbalise anything with Agnete — can be a considerable step for a child. She also knows how to make that plain in both a thematically and visually affecting manner, all as her protagonist weathers a sea of tension, love and hesitation.

Finally, My Perfectly Normal Family benefits from exceptional lead casting, with Loholt quietly expressive and compelling as Emma. Shots when she peers at the world with uncertainty welling behind her eyes — whether with Agnete, seeing Caroline adjust so easily or being wary of her teammates’ taunting reactions at soccer — possess not just depth but weight. Ranthe also leaves an impression as the elder sibling more confident in her own skin, and therefore more confident about the skin of others. That Følsgaard and Rønholt don’t fare as well as their younger counterparts is more a result of the script’s focus than of their own work, although this is a film that pushes Emma’s mother to the side. It isn’t her story, of course, but in an otherwise finessed, nuanced and never-simplistic movie that stresses the impossibility of domestic and familial normality as a concept, that decision is still noticeable.