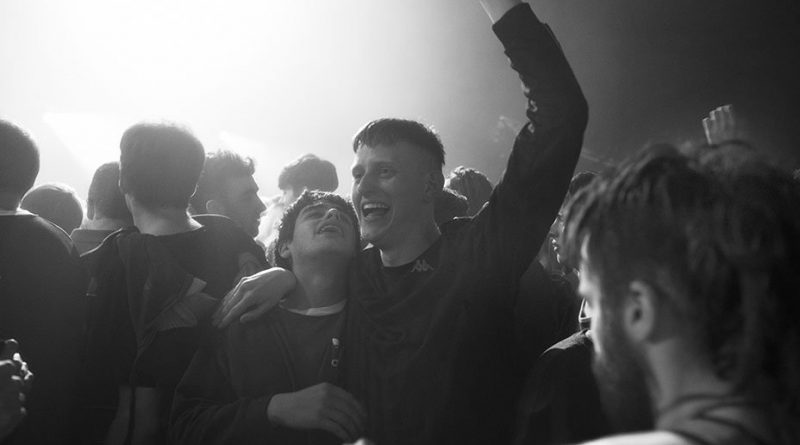 Before Beats splashes a single image across the screen, this energetic, perceptive and bittersweet ‘90s-set Scottish drama establishes its mood and vibe in a pitch-perfect way. First, viewers hear the play button being pressed on a cassette deck. Then, the thumping introduction to Ultra-Sonic’s ‘Annihilating Rhythm Part 1’ pumps through the speakers, instantly proving as infectious as it always has to dance floors filled with ravers for decades. And, through just these two sounds, the scene is set. Before writer/director Brian Welsh (The Rat Pack, Black Mirror) switches from opening title cards to the movie’s first visuals, the audience can already guess what’s coming: the sight of people dancing enthusiastically and passionately (dancing to the rhythm, in fact, as the cult hardcore hit implores them to).

In their respective bedrooms, teenagers Johnno (Cristian Ortega) and Spanner (Lorn Macdonald) let loose obligingly, their feet jumping, their arms waving and nothing but the song on their minds. They’re also on the phone to each other, with Spanner playing the track down the line after spending two days waiting for it to come on the radio so that he could tape it for his friend. As a result, they’re ecstatic. It’s a joyous scene to behold, too. The thrill they feel from listening to the music they love is contagious, and a key force in a movie that — as pre-credits opening text informs — is set in 1994, when the conservative British Government announced the Criminal Justice and Public Order Act. Amidst much outcry, the legislation effectively banned raves in the UK. Specifically, it outlawed “gatherings where amplified music is played… wholly or predominantly characterised by the emission of a succession of repetitive beats”, which is cataclysmic news for Beats’ protagonists.

A chalk-and-cheese pair of lifelong pals united by their fondness for electronic music and considered outcasts by everyone else around them, Johnno and Spanner have never actually been to the kind of party that the powers-that-be are aiming to cease. Their efforts to attend one — a last hurrah being held in secret and as a rule-flouting protest — fuel the film, which has been adapted for the screen by Welsh and playwright Kieran Hurley from the latter’s stage production of the same name. It’s a simple quest, in theory. That said, like all movies about teens trying to enjoy one big, perfect night that they’re certain will redefine their lives, this eager duo have more than a few roadblocks to overcome. As its lively opening shows, though, nothing about this spirited and evocative drama ever feels as prescriptive and predictable as it might sound on paper.

As shot in black and white by cinematographer Benjamin Kracun (Beast, Promising Young Woman) — a choice that’s amply nostalgic, also grainy and textured, and serves a narrative function — Beats ruminates on two friends reaching a crossroads that’ll likely send them in different directions. It also probes their struggling council-estate home lives, with Johnno soon to move to a better part of town at the behest of his policeman stepfather (Brian Ferguson) and with the compliance of his mother (Laura Fraser), and Spanner stuck with the stigma of having a bullying, thuggish, low-rent local criminal (Neil Leiper) for an older brother. The juncture they find themselves at, and their problems with their families, aren’t unrelated to the exuberance and euphoria that beckons one heavy beat at a time. The catharsis of escapism looms large over Johnno and Spanner’s feverish fixation with techno, and over their determination to tag along with a group of older kids to what might be their first and last rave experience.

One small, quiet and scrappy, the other lanky, outgoing and outsized in personality, Ortega and Macdonald are both fantastic as Beats’ central pals. They’re genuine in their rapport and in their portrayal of young men confronting their futures, and wholeheartedly convey the intense emotional connection their characters have to their chosen style of music. But, as crucial as they are, Beats benefits from its perspective, affection and meticulous attention to detail above all else. Part kitchen sink-style British drama, part coming-of-age chronicle, part exhilarating tribute to a particular time and scene, the film doesn’t let anything evade its vision — not the divisive mindset not only painting electronic music as alternative, but threatening to fracture Johnno and Spanner’s friendship; not the era-specific minutiae of their mid-‘90s adolescence; and not the wonders of their preferred type of respite, including a keen ear for some of the greats of the period (with immense kudos earned by Beats’ soundtrack).

In the ‘90s themselves, similar sights reached cinemas thanks to both Trainspotting and Human Traffic — one embracing the antics of a group of Scottish heroin addicts, the other diving into Welsh party and club culture. Beats falls firmly in the middle, a place that suits this deeply felt delight of a film. There’s no avoiding the grim reality faced daily by Johnno and Spanner, but no ignoring the importance and influence of their main source of happiness either. And when the movie showers its protagonists with a wave of bliss, there’s no escaping the power of those repetitive beats, or of this dynamic and authentic portrait of ‘90s youth.