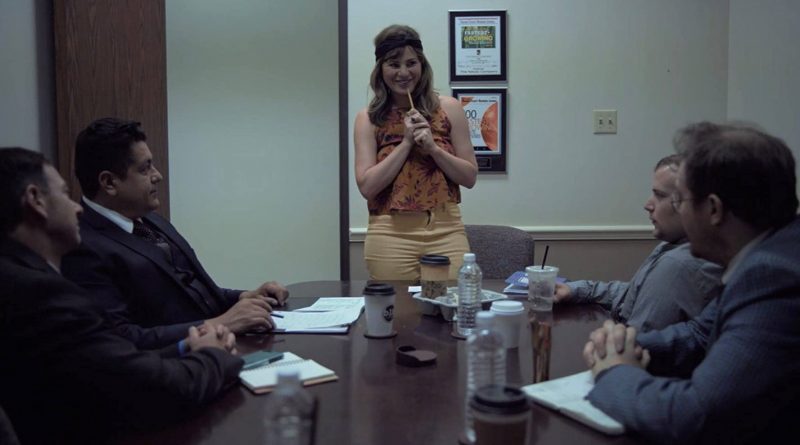 It’s a common rom-com trope: the parade of exes who, when revisited one by one, symbolise all the bad decisions a film’s protagonist has made in their life to-date. Daddy Issues saves its roll call of old boyfriends until its second half, but it serves the usual function, especially given that it’s combined with another familiar genre staple. After returning to the Los Angeles house she has unexpectedly inherited from her recently deceased father, aspiring standup comic Henrietta (Kimberley Datnow), nicknamed Henri, trawls through boxes of old belongings that also lay bare her past ups and downs. That’s where she finds letters to and from her college lovers, then becomes inspired to call them, which leads to meeting up with a few. She’s time-travelling, in a way, but she isn’t confronting her failings. Rather, she’s opting to stick with what she knows — and, for much of its duration, so is the film she’s in.

Five years after she left LA behind, and her burgeoning US comedy career as well, Henri is summoned back from London courtesy of her dad’s will. In it, in addition to leaving her his house, he expresses his wish for her to lead his American-based company. It’s the biggest display of attention her father has ever directed her way — posthumously, in writing and also conveying his disapproval of her choices thus far — and Henri is wholly unprepared for both the task and the feelings it dredges up. She’s not suited or skilled for the job, or for even her ceremonial board position. Although her performing dream hasn’t been coming true of late, she doesn’t share her father’s vision for her life. And, anyway, she has never quite come to terms with her emotionally distant dad and his impact on who she has become.

As based on a story by Datnow, her sister Amy and co-scribe John Cox, then written and directed by feature first-timer Laura Holliday, Daddy Issues establishes its titular claim early and often. It also largely interrogates its eponymous idea in an expected way. Henri is hapless, aimless and unhappy, which her sudden life-change can’t fix — and there’s an obvious source. As many a portrait of quarter-life malaise has previously demonstrated, though, recognising and challenging the status quo is the first step to moving forward. In case viewers needed a more concrete reminder, the film also treads the same path with Henri’s friend Alice (Alice Carroll Johnson), a queer woman in a relationship who signs up for a sugar daddy dating website in order to help fix her financial problems. There’s also Henri’s college pal Nolan (Tanner Rittenhouse), who works at her father’s company, lives in his house under the pretense of working on its deck and may be more attached to him than Henri ever was.

There’s an air of Frances Ha about Daddy Issues, as Henri and her friends grapple with the vast chasm between their hopes and their reality — and, weathering that gap day by day, make typically poor decisions they’ll eventually learn from. That said, there’s an air of every finding-yourself comedy about twentysomethings tussling with maturity, and every romantic comedy about not always seeing what’s right in front of you. But Holliday’s film isn’t served best by playing it safe, hitting familiar adult coming-of-age and rom-com marks, or resembling other movies. When it does just that, particularly where Alice and Nolan are involved, it proves engaging enough while brandishing a been-there, done-that atmosphere.

Instead, Daddy Issues shines brightest when it leans into Henri’s chaos and contradictions as she attempts to cope with a loss she didn’t anticipate would cause such an impact, and to face the difficult choices laid out in front of her in the aftermath. Played as equally impetuous, awkward, self-sabotaging and overly self-assured by an impressive Datnow, she sports recognisable traits and behaviours, but never adheres to a clear-cut type. Indeed, although Henri’s journey remains self-evident, she’s the film’s much-needed source of mayhem, upheaval and spontaneity. It’s little wonder that both the character and Datnow’s performance always command Daddy Issues’ static frames in the process, giving the movie the spark it yearns for.