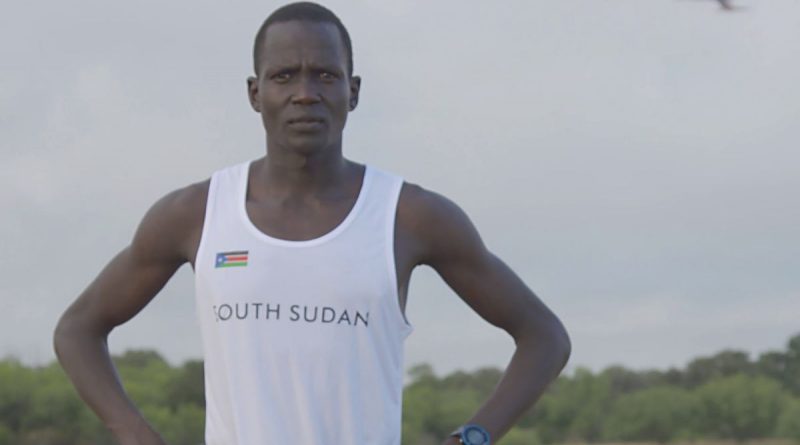 Director Bill Gallagher’s documentary called simply Runner does indeed, truth in naming, focus on twice Olympic marathon competitor Guor Mading Maker, previously Guor Marial. But that merely identifies his adult achievement as an elite athlete whereas Guor’s first, desperate running as a child was to hide in bushes in order to save his life in his native warring Sudan.

That was the first time Guor ran. Soon, to escape captivity, Guor again ran for his life. After four years in survival mode on his own, Guor found his aunt and uncle in a displacement camp and was relocated in 2001 to Concord, New Hampshire. There, his athletic ability brought Guor success in Concord High School, followed by a full track scholarship and All-American honors at Iowa State. But he never forgot his roots as he championed the new country of South Sudan, working for its Olympic recognition.

Should this sound like a fairy tale, let me quickly correct that impression, for Guor endured additional heartbreaking events. Through it all, Runner pays homage to his incredible courage and his indomitable spirit, just when such a celebratory story of admirable discipline and unbelievable perseverance is welcome, even needed. It isn’t that Guor had an easy time, ever. Yet he is never self-congratulatory, always humble, proud above all for his teammates and fellow citizens. His love of South Sudan endures and is deeply moving. Some scenes bring tears, at times of joy and at times of sadness, while his return to his childhood home after twenty years evokes both in an unforgettable reunion.

For this extensive portrait, Gallagher includes interviews with Guor, teammates and coaches, archival footage, and animation of Guor’s early days. Some brief, wartime images are difficult to watch, testifying to Guor’s assessment that, yes, this was a long journey, always a struggle to have come this far, so he had to do something positive. As he concludes, there’s always hope, always the next day. We should be so fortunate as to learn from such a noble man. Runner is available for streaming through links to several cinemas, marathons and running groups, film festivals and societies. You may go to runnerdoc.com for these links and more information.