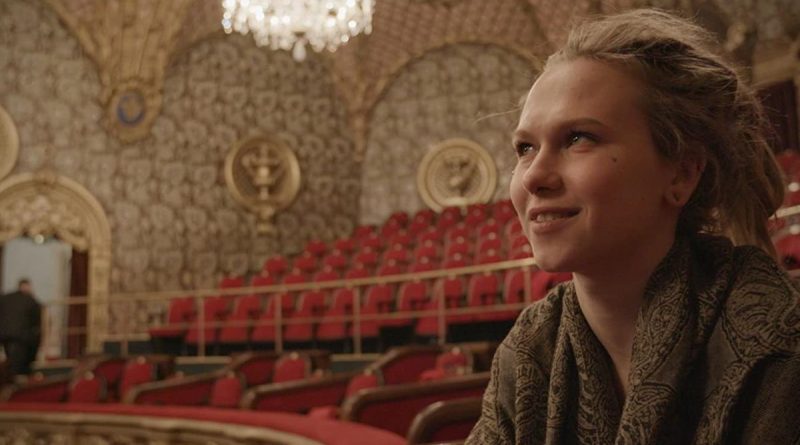 No one should ever judge a piece of art by its title, as the old adage about books and covers tells us — and A Year Full of Drama is no exception. Marta Pulk’s documentary boasts a playful moniker, as well as an accurate one in two ways; however one reading bears more weight than the other. Following an industry newcomer hired to watch every Estonian production staged over the course of a full 365-day period, the film does indeed fill its frames with 12 months of theatrics. As the year ticks by, 21-year-old Alissija-Elisabet Jevtjukova watches 224 shows and, as part of her employment arrangement with creative collective Kinoteater, blogs about each. But A Year Full of Drama isn’t concerned with the state of the country’s performing arts during that time. It relays snippets of the works seen, plus fragments of Alissija’s writing, but that isn’t the documentary’s primary focus. While its subject spends 12 months pondering Estonian theatre — and, more than that, being immersed in it — the film itself spends the time chronicling the dramas that stem from her life-altering, eye-opening, all-encompassing fish-out-of-water experience.

When Alissija answers Kinoteater’s unusual advertisement, she’s a small-town resident living with her mother and brother, eager to find a path that doesn’t involve working at the local supermarket, and willing to take almost any chance. She’s also accustomed to standing on the edge of any given crowd, thanks to her Russian-speaking family — which makes her an outlier in Estonia — as well as her introspective temperament and a background filled with adolescent angst. It’s clear that securing the job will change much for her. She’ll need to move to Tallinn on her own, step into an unknown world, surround herself with culture in a way she never has before and embrace an art form she’s largely unfamiliar with, while trying to balance her personal and professional lives, and also figure out who she really is. Bright-eyed and eager, including when she does the rounds of Estonia’s media to promote her new gig, she’s initially enthusiastic about the challenge. That said, 224 plays is a considerable number, and a year is a long time.

Pulk might’ve commenced A Year Full of Drama as part of Kinoteater’s experiment, and to chart that experiment, but her film is clearly driven by Alissija. Indeed, while anyone could’ve been chosen for the novice theatre critic position, including someone with a similar background, this wouldn’t be the same movie without her. How she responds to each work is unique and personal. How she reacts to her new job, new city and new lifestyle is as well. As the days and shows roll along, she copes (and sometimes doesn’t) in a way that only she can, as informed by everything that’s made her who she is up until this moment, everything she brings to each production, and everything that’s happening to her due to this drastic shift in her routine.

Accordingly, A Year Full of Drama embraces an idea that’s as basic as not judging a book by its cover, but just as often ignored: that, while engaging in art is a universal experience that can evoke shared overall responses, everyone still interacts with everything they consume in an individualistic manner. Alissija’s year full of drama sees her forge her own opinions about Estonian theatre; however, more importantly, it sees her reflect upon her life through said copious amounts of Estonian theatre. That’s something we all do while watching anything, but here it’s heightened and more blatant given the circumstances. Alissija works hard, then doesn’t. She relishes some productions, dislikes others, and feels both apathy and malaise set in. She observes performer after performer live out the lives of others on the stage, and can’t help thinking about how she wants to live her own life — both now and in the future.

Witnessing and capturing Alissija’s coming-of-age journey, Pulk tells her tale with an empathetic eye. She also knows how to let a story evolve naturally and when to follow a tangent — and how to make one person’s specific experiences resonate with everyone. As shot with naturalism over slickness, A Year Full of Drama offers viewers exactly what Alissija found in her job: a chance to engage with a work of art, feel its universal resonance and process it through their own distinctive filter. Someone who isn’t a film critic might not connect so strongly to the unglamorous and highly realistic portrayal of the critic’s life, for example, but everyone will spy a piece of themselves in this revelatory examination of one woman’s 12-month endeavour.