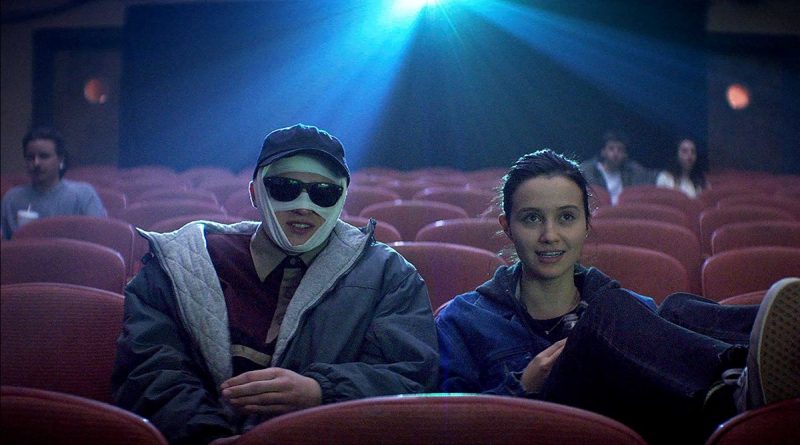 Looks That Kill begins as a dark comedy, evolves into a romantic teen fable and suddenly veers off into euthanasia territory. Kind of a tone whiplash situation, but a YA audience will probably find lots to like regardless.

A feature debut from writer/director Kellen Moore, Looks That Kill centres on Max (Brandon Flynn), a teenage boy of such rare beauty that people die if they look at him. He’s drop-dead gorgeous. When all the doctors and nurses attending his birth keel over, his parents understand that this is an unusual child. They can look at him, but nobody else can.

By the time Max is a young adult, his lethally attractive visage requires that he cover his face with dark glasses and bandages at all times — which leaves him looking a little like the 1933 version of The Invisible Man.

His fatal pulchritude power makes him a weirdo of course, and a depressed weirdo, too. So far we’re on a lighthearted walk through the usual teen angst, with romantic rejection, bullies, visits to the shrink and a bad blind date.

It’s all fairly comic. Then boy meets girl, and the story gains focus. Julia Golden Telles is Alex, a girl Max first encounters at the doctor’s office.The next time they cross paths, he’s thinking about jumping off a bridge. Alex has issues of her own, mostly related to a heart that just won’t stop growing. It’s important that she keep extremes of emotion at bay, so falling in love presents its own set of problems.

Together, Max and Alex visit a couple of elderly friends at a nursing home, a situation that leads eventually into a death with dignity add-on to the story that is wildly jarring. When a viewer is being asked to laugh at death, Looks That Kill works nicely. It’s very funny, and the humor has a nice, light touch.

There are wry visual flourishes — household taxidermy, anyone? — and some lovely performances.
Even when the story stops making sense, things on the periphery continue to be attractive, especially the characters: Ki Hong Lee as Max’s best friend Dan, for example, or Priscilla Lopez and Susan Berger as the madcap geriatrics. As Max’s parents, Annie Mumolo and Peter Scolari add to a general sense of
whimsy.

We wondered at first if Kellen Moore might be subverting notions of the male gaze in Looks That Kill, and then it seemed the film was a love story flirting with ideas about the passage of time and after that grief appeared to be the subject matter. It’s never less than pleasant to look at and it’s nicely crafted; the storytelling is a bit wobbly, that’s all. It will be interesting to see what Moore does next.