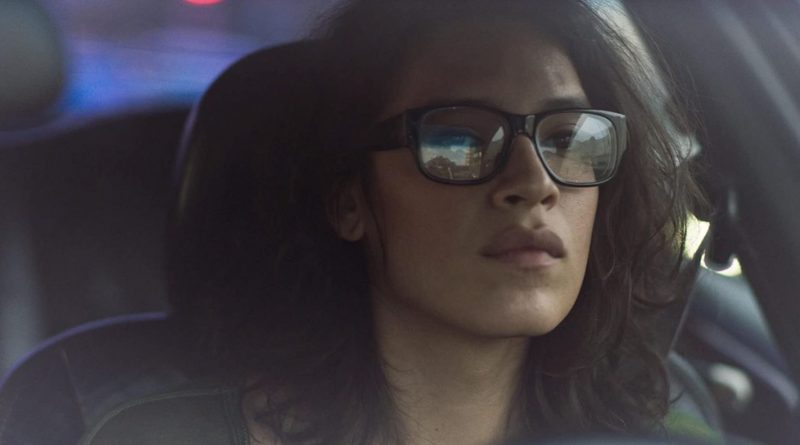 The Garden Left Behind presents a complex transgender community.

Too seldom do complex transgender protagonists drive mainstream narrative films. Credit then to Brazilian director Flavio Alves for giving Tina the central role in The Garden Left Behind. An undocumented transgender woman, Tina lives in the Bronx with her loving grandmother Eliana who longs to return to Mexico. Since Tina drives for Uber, that poses a daunting financial challenge.

Further expenses include tests to qualify for hormonal treatment and the prescriptions, as well as additional costs for her psychologist Dr. Cleary. Most impressively, through all Tina’s struggles, she enjoys the camaraderie of the transgender community, a critical element since physical, emotional, and verbal abuse factor in to Tina’s life. Teenage boys yell insults as they drive by, a friend is attacked, and, boyfriend Jason is embarrassed to be seen in public with her despite their passionate two years together. In response, the transgender community organizes, protests, and celebrates Tina’s thirtieth birthday in admirable fashion.

A few scenes feel a bit staged, some dialogue is too wooden, and the ending feels forced and telegraphed. Nevertheless, the depiction of the transgender world for these women of color captures profound, lived-in experiences. Moreover, determined to be authentic, director Alves cast only trans actors in all the trans roles. Foremost among them is Carlie Guevara as Tina, a dynamic presence in her first feature film. She holds the screen with charisma. In brief scenes as Dr. Cleary, Ed Asner delivers his always solid, professional performance, as does Michael Madsen in another minor role as bartender Kevin. Above all, the narrative poignantly explores the complex psychological world of trans women. Alves and co-writer John Rotondo “wanted to amplify the voice of marginalized community members who felt they are not being heard.” They have succeeded!

Text at the film’s conclusion drives home the importance of increasing awareness and support from onscreen representations. We learn that “2018 was the deadliest year on record for transgender people in the US, and nearly all of the victims were transgender women of color.” LGBTQ initiatives strongly align with the Black Lives Matter and #Me2 movements. Prejudice and pervasive violence is long overdue for confrontation and correction in cinema’s portrayals. Director/co-writer Alves shows the way. Mostly in English with some Spanish with English subtitles, The Garden Left Behind is available on VUDU, iTunes, and Fandango.