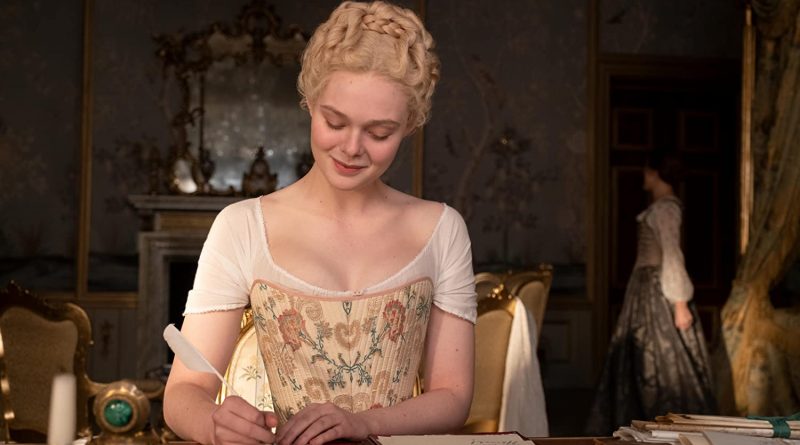 Elle Fanning stars in this cheeky 18th century comedic drama about Catherine the Great of Russia, billed as “an occasionally true story.”

When optimistic 19 year-old Catherine (Fanning), daughter of a German aristocrat, arrives in Russia for an arranged marriage with Czar Peter III (Nicholas Hoult), she has no idea what a cruel, erratic idiot he is, more devoted to his whores and horses than her or his country.

Since better educated, bookish Catherine is of little or no interest to him, aside from bearing him a son, Peter appoints Leo (Sebastian de Souza) to be her lover, since he’s known to have a large, but sterile organ.

“Peter did not have an entirely bad heart,” Catherine once observed, “but a weak man usually does not.”

So, as her husband wages a continuing war with Sweden, Catherine systematically gathers her own idealistic power base, including her lady-in-waiting Marial (Phoebe Fox) and Count Orlo (Sacha Dhawan).

It was Orlo who came up with the diabolical plan: “It is better we secure the palace, arrest him, get him to sign an abdication, send him to house arrest, and then burn the house down…”

Eventually, Catherine has Peter deposed in a 1762 coup, so she becomes Empress of Russia, determined to bring female education and enlightenment through the arts and science to her people.

Scripted by showrunner Tony McNamara (co-writer of Yorgos Lanthimos’ The Favourite) the 10 hour-long episodes, filled with absurd palace intrigue and farcical depravity, are of varying quality, cohesion and interest.

One major aberration is presenting Peter III as Peter the Great’s son; in reality, he was his grandson.

This mini-series has no relation to nor should be confused with last year’s HBO mini-series Catherine the Great, starring Helen Mirren. And for those who enjoy old movies, back in 1934, the Russian ruler was embodied by Marlene Dietrich in The Scarlet Empress.

On the Granger Movie Gauge of 1 to 10, The Great is a bawdy, satirical 7, a royal romp.