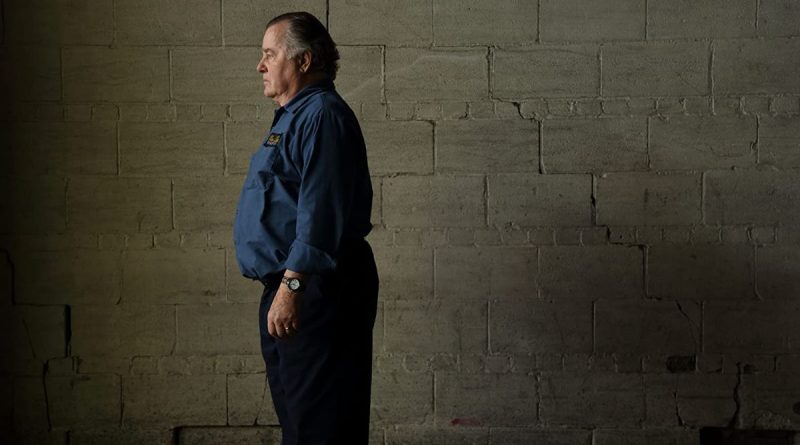 You are what you do — until you can’t do it anymore. And then, who are you?

That’s the simple, sobering premise of Working Man, a quiet — and then not so quiet — study of a Rust Belt old-timer struggling to weather changing times.

Until the last workday, when a smarmy corporate executive — accompanied by the only slightly less smarmy plant manager — arrives to present loyal employees with their final paychecks, marking the factory’s last day.

“That man looks old as dirt,” the suit says of Allery. “The last thing the company needs is some broken-down geriatric getting left behind.” Then again, “maybe Walmart’s hiring.”

Or perhaps Allery will just keep doing what he’s always done, reporting to the factory, toting his metal lunchpail (complete with Braunschweiger-on-white-bread sandwich) and Thermos.

This mystifies his wife Iola (Talia Shire, Rocky’s faithful Adrian) who warily watches her husband’s going-through the-motions routine — even as she goes through her own.

Someone else also has his eye on Allery: neighbor Walter Brewer (coiled-spring powerhouse Billy Brown of TV’s How to Get Away With Murder), who has an idea that may just save the plant.

Or maybe not. But at least the scheme gives Walter, Allery and the 23 other workers — at a factory that once employed 500 — a chance to rage against the dying of the light rather than dissolve into obsolescence and oblivion.

Jury’s script mixes a variety of elements, from gritty kitchen-sink realism to Capra-esque triumph-of-the-little-guy uplift. To say nothing of the separate family heartbreaks that haunt both Allery and Walter.

Yet Working Man plays its strongest hands in the movie’s early, almost entirely silent sequences, which set the stage for dramatic complications to come with vivid visual details, captured with evocative precision by cinematographer Piero Basso and father-daughter editors Richard and Morgan Halsey. (Chalk up another Rocky connection: dad Richard won an Oscar for editing the 1976 original.)

Similarly, Gerety’s understatedly poignant portrayal of Allery — from trembling lip to darting, disbelieving eyes — tells you everything you need to know about this Working Man’s anxiety, anguish and pride. Even before he ever says a word.