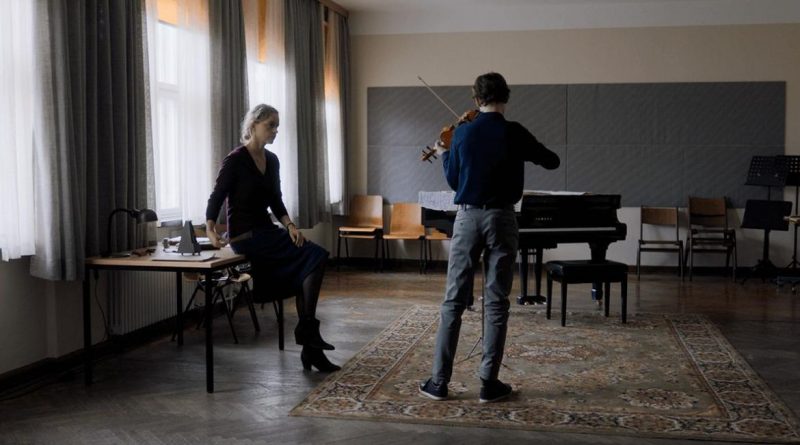 The old saying “still waters run deep” is an apt description of the main character in Ina Weisse’s intensely observed drama The Audition. Anna (Nina Hoss) is a wife, a mother, and a music teacher whose life might look calm and stable from the outside but whose inner life and conflicts threaten to boil over daily. Hoss’ magnetic performance will keep you invested in where Anna’s choices take her. 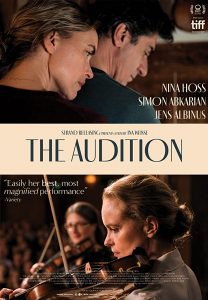 Anna has high expectations for both herself and for conservatory student Alexander (Ilja Monti), whom she’s taken on as a pet project despite her colleagues’ doubts. As she prepares him for an extremely important performance/exam, she pushes him hard (some scenes almost bring to mind JK Simmons’ relentless character in Whiplash). This focus on Alexander distracts her from her own son, Jonas (Serafin Mishiev), and her marriage to Philippe (Simon Abkarian), whom she claims to adore but whom she’s cheating on with fellow conservatory staffer Christian (Jens Albinus).

Add to this Anna’s anxiety about her own ability to perform and her struggles to help her aging parents, and it’s easy to see why she seems on the verge of a breakdown. But she works hard to hold her life together and to keep Alexander on track; then a shocking turn of events changes things for everyone. Through it all, Hoss holds viewers’ attention with her subtle, utterly realistic performance — her Anna is complex, complicated, and fully rounded.

The Audition marks Weisse and co-screenwriter Daphne Charizani’s second collaboration (their first was 2008’s The Architect), and it’s a clear demonstration of both of their talents. The music that infuses the lives of Anna, Alexander, and the other characters guides the rhythm of their scenes and speaks when their characters are silent, ultimately creating a symphony of conflict, emotion, and release. — Betsy Bozdech

Nikki Baughan: The magnificent Nina Hoss (A Most Wanted Man, My Little Sister) puts in another pitch-perfect performance at the centre of Ina Weisse’s taut, slow-burn drama. Her music teacher Anna is poised and meticulous, with a loving family but, as she invests herself in a promising new student, the cracks begin to show both at home and at work. The screenplay, co-written by Weisse and Daphne Charizani, is a masterful composition of domestic tension, a coiled spring of repressed emotion and things left unsaid. During the first half, the performances keep us absorbed and then, as the pack quickens, we are pulled along in the wake of Anna’s increasingly frantic energy, as she tries to stop her life from unravelling. It’s thanks to Hoss’s subtle portrayal of this desperate woman — her fractured relationship with her son, her barely concealed contempt for her colleagues all seething underneath the surface – and Weisse’s light-touch direction that the film doesn’t reveal itself in its entirety until its closing scenes.

Susan Wloszczyna: The real conflict on screen exists inside of German actress Nina Hoss as the high-strung Anna. The Audition would be played in a minor key if it weren’t for Hoss’s well-modulated emotional outbursts and physical reactions. There is plenty of Bach to be heard on the soundtrack but film’s female star is the one who keeps everything in tune. Read full review.

Leslie Combemale: As violin teacher Anna, lead Nina Hoss expresses the weight of an oppressive, omnipresent frustration and self-judgment by the way she carries her body, risks a glance, or pauses in what she says. Constantly on edge, she is deeply unhappy, though she doesn’t have to be. In The Audition the music acts more as a metaphor for always having the potential to be better, and perhaps never being enough. One can listen to the beauty of the music, or one can listen for what is missing. Either can be discovered, and it is Anna’s plight to be trapped in a whirlwind of disappointment in life and in herself. Writer/director Ina Weisse in her partnership with consummate actress Hoss, has created a fascinating character study that captures a woman struggling against giving in to her worst impulses and opinions. Whether she is accurate in how she sees herself depends on each viewer’s perspective. Either way, the cinematic journey is dark and compelling.

MaryAnn Johanson: Is there a facet of human reality more ignored onscreen than the inner lives of women? Ina Weisse’s The Audition, an extraordinary character study of an ordinary woman, is a terrific pushback against the notion inherent in our culture that women’s everyday lives are not interesting or dramatic enough to be worth telling stories about. Nina Hoss brings so much perceptive depth to the internal struggles of her Anna, as she juggles her work as a music teacher, her difficult family, her affair with a colleague, and her own self-doubts, all while appearing calm and collected on the surface. Maybe the real beauty of this film is that Anna herself probably doesn’t realize or acknowledge the pain and confusion roiling in her, might well think she’s handling it all just fine. Women rarely get to be such complicated, human messes onscreen, and have their contradictions and hypocrisies go so ultimately unresolved. Anna is not a puzzle to be solved or a problem to be fixed, by herself or others: she is just who she is.

Pam Grady: Nina Hoss gives a nervy, masterful performance as a violinist and music teacher hovering on the edge of an emotional breakdown in Ina Weisse’s slow-burn, character-driven drama. Anna Bronsky’s (Hoss) decision to take on a student for whom no one else at her school has much enthusiasm produces unforeseen consequences in her professional and family lives. Weisse and Daphne Charizani’s screenplay deftly portrays the traps that await Anna at both school and home. Hers is a downward spiral and at risk is not just her own fragile psyche, but her marriage to luthier Philippe (Simon Abkarian), and the well-being of her diffident student Alexander (Ilja Monti) and young son Jonas (Serafin Mishiev). Hoss accepts the challenge of a demanding role and answers with a stunning, multilayered portrayal of a hauntingly troubled woman.

Jennifer Merin: The Audition, a second collaboration between German director Ina Weisse and co-screenwriter Daphne Charizani, is a wonderfully rich, nonjudgmental character-driven drama about a woman who lives with massive internal conflicts while functioning unobtrusively in a seemingly quite ‘normal’ life. The brilliant Nina Hoss stars as Anna Brodsky, a talented violinist and violin teacher whose dedication to a gifted protege, Alexander (Ilja Monti), causes turmoil and emotional rifts with her husband and young son, who is also a violin student. In her brilliantly nuanced and utterly captivating performance, Hoss reveals the discrepancies between Anna’s inner and external character arcs little by little, and with some stunning surprises. Hoss is supported by a superb ensemble cast. And the film’s soundtrack is sensational.

Loren King: Nina Hoss is such a fearless actor, delivering performances of such layered complexity and nuance especially in the exquisite Barbara (2012) and Phoenix (2015), both directed by her frequent collaborator, Christian Petzold. In The Audition, directed by Ina Weisse and co-written with Daphne Charizani, Hoss delivers another mesmerizing, textured performance as Anna, a violinist who teaches at a prestigious music school and who takes on a promising young student, Alexander (Ilja Monti). This intense, austere but captivating film, and Hoss’s tour de force as an insecure perfectionist whose concert days are behind her, recalls Michael Haneke’s The Piano Teacher (2001) starring Isabelle Huppert. Anna puts all her demanding control, rigidity and expectation on the young Alexander, building to a scene that blurs the lines between exacting teacher and abuser. The ending of the film falls into melodrama, but Hoss’s impeccable performance is never less than transcendent.

Nell Minow: Nina Hoss gives a stunning performance in The Audition. The woman she portrays has boundary issues, identifying too strongly with her student and her son, keeping herself distant from her husband, her lover, and her father, needing too much validation from her colleagues. But Hoss herself is completely in control, every scene, every interaction precise, conveying the internal struggles her character is unable to acknowledge.

Kathia Woods: The violin is one of the hardest instruments to master. Anna (Nina Hoss), a violin teacher at a music conservatory, sees in her new teenage student, Alexander (Ilja Monti, the raw talent that could make him a star. She sees him as the embodiment of everything she is not. The issue is that while projecting her expectations on Alexander, she neglects her son (Serafin Mishiev), who is also studying the violin. The Audition is a complicated well-acted web. The lesson here is that you cannot ask others to fulfill your dreams.

Cate Marquis: German director Ina Weisse’s The Audition does indeed open with an audition but it is not the young classical violinist auditioning who is the major focus of this taut psychological drama, with a script co-written by Weisse and Daphne Charizani, in German and French. Alexander (Ilja Monti), a shy, slight teenage boy, is one of several youths trying out for a spot at a prestigious music conservatory, but Anna (the fabulous Nina Hoss), one of the teachers doing the selecting, sees something special in him. Or perhaps it is something that reminds her of her younger self. At first, Anna appears calm and confident and her home life with her preteen son (Serafin Mishiev), who plays both violin and hockey, and her instrument-building French-speaking husband (Simon Abkarian), looks serene. But cracks quickly appear, and we are treated to a tour-de-force performance by Nina Hoss, as Anna grapples with her own doubts, insecurities and questions about her life. There is little exposition, everything just unfolds in series of scenes sometimes quiet, sometimes unexpected, until the dramatic ending, but it is a complex portrait and Nina Hoss holds us in her power throughout.