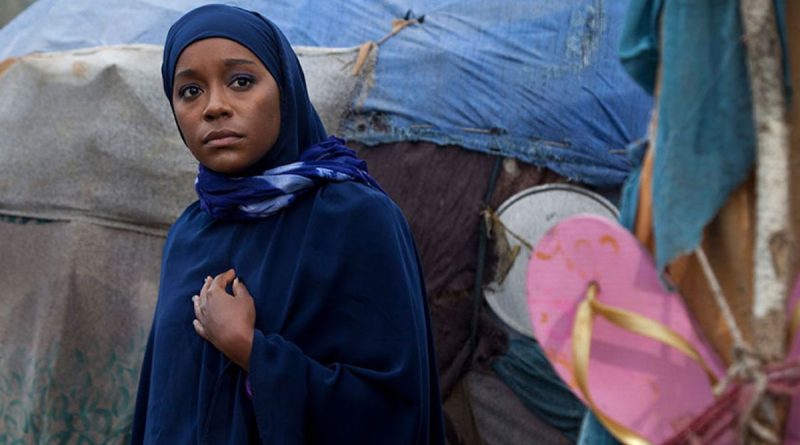 A Girl from Mogadishu isn’t a subtle film, as its score instantly and repeatedly makes plain. From the second that its first frames roll, rarely a moment passes without an acoustic prompt, be it a somber note or contemplative melody, emphasizing the gravity of the movie’s subject matter. But, given the particulars unfurled across its 113 minutes, the absence of nuance and elegance in its approach is to be somewhat expected. While the movie’s true tale would still spark a strong response without such auditory hand-holding — and likely still see it garner the attention of the United Nations — this biopic, drama, survival story, and clear piece of advocacy and activism uses every tool it can to spread its crucial message against female genital mutilation and cutting (FGMC).

When the movie begins, it does so in Afgooye, Somalia in 1999, with a brief glimpse of seeming happiness. As shot with a dream-like use of wavering focus — shifting in and out as moments pass — that visibly aims to evoke a series of joyful memories, a family and a community appear to go about their ordinary, everyday lives, their contentment ostensibly evident. Light tones and shining sunlight set a clear mood, as does the stark contrast with what comes next. When the film switches to a wide shot of the seaside Mogadishu in 2006, it then slides into the darker reality that’s taken hold of the country. Panning across the city, it watches on as war eclipses every facet of normality, forcing the titular teenager Ifrah (Aja Naomi King) to attempt to flee to safety overseas.

“I remember that last day, the day I felt as if my life had ended,” King’s impassioned voiceover explains as the sight of violence exploding through Mogadishu fills the screen. It’s a purposefully dramatic statement but, with A Girl from Mogadishu based on the real-life Ifrah Ahmed’s actual experiences, it ripples with truth. Of course, as writer/director Mary McGuckian (The Price of Desire, Man on the Train) explores, war, and becoming a refugee from it, are simply two of the grim circumstances that the movie’s eponymous character has had to deal with. After being told she’s travelling to America but eventually landing in Dublin, Ireland, she applies for asylum, which requires a medical exam. And, while that’s a vast improvement on the situation she left at home, the process reveals — to the doctors and to the girl herself — the extent of the intimate mutilation that Ifrah has endured.

With Ifrah now a prominent campaigner against the practice she went through while being held down by her grandmother when she was just a child — one that, when first asked about it by shocked medical professionals, she justifies as “this is my culture; this is us; it just happens” — it’s no surprise that the film devotes its second half to her efforts to raise awareness about and push for the outlawing of FGMC. Understandably, A Girl from Mogadishu is at its most powerful when Ifrah confronts and tries to challenge the widespread acceptance of the disfiguring, human rights-abusing so-called tradition, including back in Somalia. Indeed, these scenes demonstrate tension that other, earlier sequences overtly strive for, but don’t always match. The fraught transit sequences to Europe, for example, prove suitably terse. The uncertain motives of Ifrah’s escort Hassan (Mogadishu-born Captain Phillips Academy Award nominee Barkhad Abdi) help ramp up the stress. But, compared to facing those responsible for FGMC, they pale.

Movies resting so heavily on a cause, stepping through the life of an inspirational person devotedly fighting for it and relying on dramatized recreations can feel like a foregone emotional conclusion, which is the case here; as told forcefully and blatantly, there’s never any doubt that Ifrah and A Girl from Mogadishu’s crusade against gender-based violence is worthy, vital and deserving of more attention, or that the specifics depicted and discussed will cause a reaction in viewers. Still, this is film with weight and purpose, as well a palpable sense of determination. It’s also one that, thanks to the impressive King, conveys an important piece of reality through a potent lead performance.